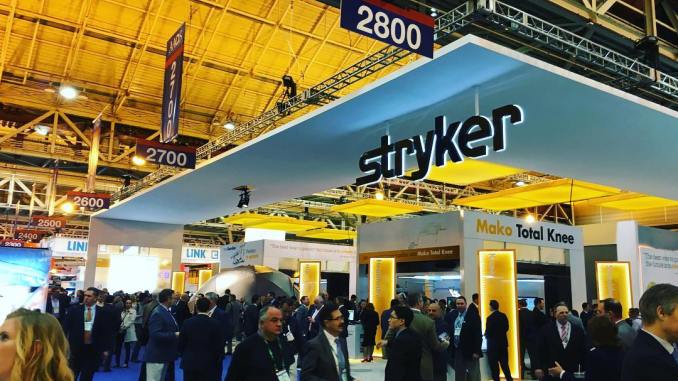 Stryker was founded in 1946 by Dr. Homer Stryker and has since grown to become one of the largest medical technology and device companies in the world. The company partitions their products into three product groups: Medical and Surgical, Reconstructive, and Neurotechnology & Spine. The Medical and Surgical group offers power tools, surgical equipment, computer-assisted surgery systems and applications, minimally invasive surgical solutions and products pertaining to patient care and EMS. The Reconstructive product group provides implant products and systems for hips and knees, trauma and extremities, foot and ankle, sports medicine, orthobiologics and biosurgery and shoulder. The third product group, Neurotechnology and Spine, offers systems and instruments for craniomaxillofacial, interventional spine, neurosurgical, spine and ENT, neurovascular and spinal implants.

Stryker is the leading competitor in the US market for video and integrated OR equipment. Their dominance can be partially attributed to their early entrance to the integration business which allowed them to amass the largest installed base in the market with over 10,000 integrated ORs in the US alone. Stryker shows robust sales in the markets for OR integration components, surgical camera systems, digital image capture and recording devices, surgical display and PACS monitors, surgical light sources, surgical lighting and surgical booms.

Karl Storz offers products in many of the same segments as Stryker, with often slightly lower but similar market shares, and a strong performance overall despite losing market share to Stryker in previous years due to its delayed introduction of HD products. STERIS was initially a sterilization company that also sold booms and lights, which then entered the integration market without the video or instrumentation component. It is highly unusual for a company without a dedicated video modality to be so successful within the integrated OR market, but the company has built a stellar reputation for its highly advanced and reliable infrastructure offerings. Olympus secured greater market share through its large-scale acquisition of the ImageStream product portfolio in 2015 and its continued success in integrated and hybrid ORs, as well as a strong performance in the image capture market.

Top 3 Companies Stryker Competes With in the Surgical Navigation Market

Stryker currently offers three navigation systems with a primary focus in the orthopedics market, but all three systems are also well-suited for cranial, ENT and spinal procedures. Karl Storz is a relatively new competitor in this market with its NAV1™ systems. Brainlab markets three portable navigation platforms which offer varying degrees of sophistication depending on the user’s needs. Medtronic offers both navigation platforms, as well as their own imaging system that can be integrated with their StealthStation® navigation system to provide fast, easy, safe and seamless integration with 2D and 3D imaging.

Click to learn more about the US Surgical Navigation Market

Stryker assumes one of the leading positions in the robotic-assisted surgery market through largely successful sales of its Mako Robotic Arm, a product which Stryker obtained through its acquisition of MAKO Surgical Corporation in 2013. Intuitive Surgical is one of the oldest players in this market, having received FDA approval for their da Vinci® surgical system in 2000. Accuray offers the CyberKnife® system, which is FDA approved to treat tumors in any area of the body where radiation is applicable. Mazor Robotics received FDA clearance for cranial surgery with their Renaissance™ system in 2012, including biopsies, hydrocephalus shunt, and electrode placement. The company announced a definitive merger agreement with Medtronic in September 2018.

Click to learn more about the US Robotic Systems Market

Top 3 Competing Companies to Stryker in the Laparoscopic Device Market

Click here to learn more about the US Laparoscopic Device Market

Stryker generates the largest share of its arthroscopic device revenue from the shaver blade, fluid management disposable, RF probe and arthroscope markets. Smith & Nephew is active in all segments of the total arthroscopy market, but has the strongest showing in the high-value RF probe segment. Similarly, ConMed Linvatec is also present in all segments of the market, but captures the majority of its revenue from the fluid management disposables and disposable shaver segments. Arthrex is a strong competitor across various disposable markets. The company’s share in the disposable shaver blade segment has increased substantially in recent years with the adoption of the company’s premium-priced specialty resection portfolio.

Click here to learn more about the US Arthroscopic Device Market

Stryker’s shape memory staple market share has significantly increased since their acquisition of the privately-held French company Memometal Technologies in July 2011. With this acquisition they gained the already popular MemoClip™ heat activated compression staple. DePuy Synthes has leading shares in all small bone and joint orthopedic device segments, with the exception of the staple fixation segment. Wright Medical is striving to become the default foot and ankle market manufacturer and offers a complete site of products for foot and ankle orthopedic surgeons. To support their strategic vision, Wright Medical purchased foot and ankle specialists Solana Surgical and OrthoPro in November 2013 and May 2014 respectively. Zimmer Biomet holds a leading position in the shoulder reconstruction market; Zimmer successfully acquired Biomet through a $13.35 billion deal and their absorption of Biomet, who was on track to become the leading shoulder market player, has propelled Zimmer Biomet to become the definitive market leader.

Stryker maintains a strong position in the plate and screw market with sales of its VariAx™ distal radius locking plate system. They also carry their AxSOS Plating Systems which treat small bone fractures, as well as proximal humeral plates. Smith & Nephew offers a wide variety of plate and screw systems that can be used throughout the shoulder, elbow, wrist, femur and tibia. DePuy Synthes offers an extensive line of intramedullary nailing systems which, along with plates and screws, is one of the company’s strongest revenue streams. When DePuy Orthopaedics Inc. acquired Synthes, they sold their own trauma department to Biomet (later Zimmer Biomet) in 2012.

Stryker has multiple product lines spanning most of the segments in the market, including metal sutures, radiofrequency probes, suture passers and more. Stryker’s presence in the all-suture anchor market however, has diminished due to the entrance of Arthrex into the market. Smith & Nephew has a significant market lead in the hip arthroscopy market and they recently acquired Arthocare in 2014 to further their radiofrequency probe technology and solidify their lead in the market. DePuy Mitek has a limited presence in the hip arthroscopy market, but holds significant shares in the shoulder and knee arthroscopy markets.

Click here to learn more about the US Orthopedic Biomaterials Market

Top 3 Competitors to Stryker in the Spine Market

Stryker is a strong player in the traditional spine market, but has a relatively weaker position in the MIS spine market. As a result, their total market share trails behind that of Medtronic, DePuy Synthes and NuVasive who all have capitalized on the growing trend on MIS solutions early on. To expand their presence in the MIS market, Stryker acquired rival K2M in the fourth quarter of 2018. K2M’s addition to Stryker’s strong existing product portfolio allows them to reach a wider range of patients and master new manufacturing technologies.

Click here to learn more about the US Neuromodulation, Neurovascular, Neurosurgical and Monitoring Device Market