This Global Report Series represents iData’s entire collection of country-level reports in the Global Dental X-Ray Imaging market. Each of these reports may be purchased as a stand-alone report, tailoring the data to your needs. The covered countries are listed below, including the report’s base year:

The dental x-ray market continues to be in a state of change as traditional film-based procedures experienced sharp declines, shifting the market to incorporate digital capturing methods.

Analog intraoral X-ray machines have become nearly obsolete since the introduction of digital imaging to dentistry. The large majority of new intraoral X-ray systems sold are PSP systems or digital sensors. The intraoral X-ray systems market has become a replacement market where analog units are constantly being traded for digital systems. A significant number of dentists in some countries (i.e. Germany) are still using analog systems, whereas in some other countries and regions (i.e. Scandinavia), digitalization has reached 80% of the market. However, across all markets, whenever analog systems need to be replaced, digital systems are preferred.

The choice of digitalization, or PSP systems versus sensors, is influenced by several factors. First, the size of the dental office determines what kind of system is purchased. Large offices with more than one dentist or assistant prefer PSP systems because the initial cost of buying multiple sensors for every room is much higher than investing in one PSP system with several PSP plates.

A developing trend in the intraoral X-ray unit market is the adoption of handheld intraoral X-ray units. While handheld systems are more expensive in the range of $7,000 to $8,000, they provide added benefits over their wall-mounted counterparts. Benefits include their ability to be used across multi-operatories within a practice, eliminating the need for multiple units in larger practices; as well as their space-saving design, providing more convenience to small-sized practices where available wall space is a potential issue. 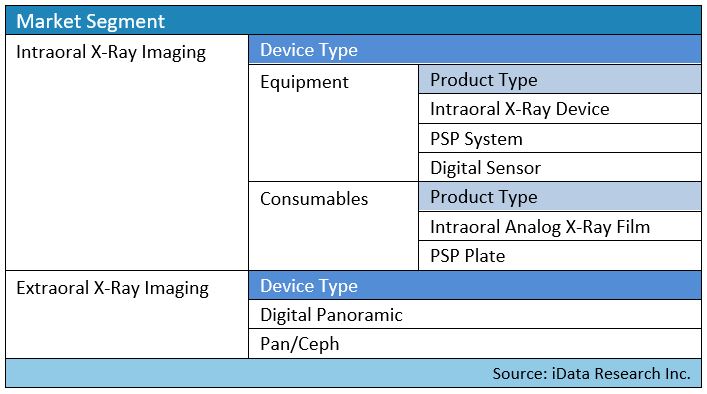 The Danaher Group was one of two competitors that held significant market shares across all four segments in 2015. The company continued to lead the market with a total market share of 30%. Danaher also led the individual extraoral X-ray device and CBCT scanner markets. With six different dental imaging brands under its name, the Danaher Group is expected to continue solidifying its presence in the U.S. market.

Carestream Dental trails behind Danaher in the United States, however competes very comparatively with Dentsply in Europe. The company is also the leading competitor in the individual intraoral X-ray device market where it had a strong presence due to sales of intraoral X-ray film.