In the U.S. urology market, the demand side of the market continues to undergo consolidation, with hospitals acquiring outpatient facilities and expanding the reach of the group purchasing organizations (GPOs), coupled with the reimbursement cuts across the urology space, average selling prices are expected to remain under significant pressure, negatively impacting the future growth of the market.

Since NeoTract launched UroLift®, an implant for the treatment of BPH, in the U.S. in 2013 and in Europe in 2010, the device has been rapidly adopted by urologists, following the trend from other regions where it is available, such as Canada, Australia and more. The UroLift® procedure is minimally invasive and can be performed in a relatively short amount of time, making it an attractive treatment option for BPH. In 2017, NeoTract was acquired by Teleflex, which is expected to further drive adoption of UroLift® by leveraging the large presence and sales distribution network of Teleflex.

While this report suite contains all applicable market data, each of the markets is also available as stand-alone MedCore reports. This allows you to get access to only the specific market segment research that you need. You can view all these included reports and segmentation here: 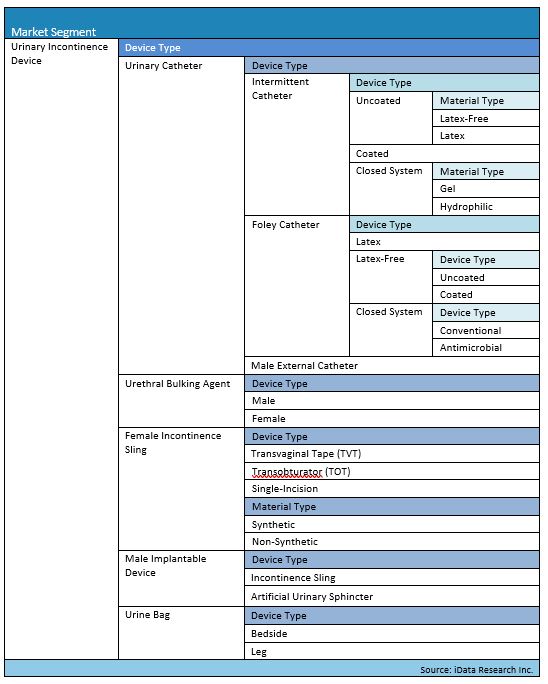 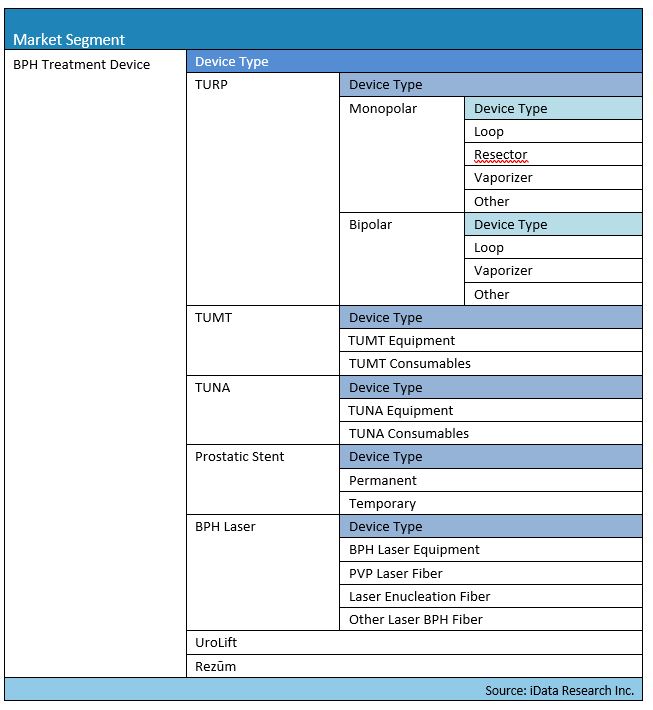 Coloplast is the leading competitor in the European urological device market. The company’s position in the overall market can be primarily attributed to its success in the urinary catheter and erectile dysfunction device markets, where it is the market leader. Coloplast is also prominent in the markets for nephrostomy devices, urinary incontinence slings and stone management devices.

In both the Indian and Japanese urology markets, Varian Medical Systems was the leading competitor in the total urological device markets. The company was only involved in the external beam radiation therapy segment. Among these urological device market segments, the EBRT segment was the largest, which contributed to the company’s large share of the total prostate cancer treatment market.

In 2018, over 2.7 million urological procedures were performed in Europe, a small increase from the previous year. With a procedural share of over 45%, stone management procedures accounted for the largest portion of all procedure types discussed. This was followed by prostate cancer, interventional BPH procedures and nephrostomy procedures.

Benign Prostatic Hyperplasia is one of the most common diseases for men, especially for men older than age 50. The prevalence of BPH increases with age, starting at 8% in men between ages 31 to 40, to 60% at the age of 60 and 80% over the age of 80.

A study published in The Canadian Journal of Urology reported that 23% of diagnoses seen by urologists in urologic practices are BPH diagnoses, making it the second most common diagnosis after UTIs. There have been no clear patterns regarding age-adjusted relative BPH risk and ethnicity, as epidemiological studies have reported inconsistent results.

See many more by requesting a free sample report of this analysis.

For a Full Table of Contents From Any of the Country Reports in this Global Series, please Contact iData
One of the the most accurate methods of market research in the medical device industry is to analyze the procedure volumes and trends. Through this study on urology devices, iData Research has performed an analysis on the following procedure segments in order to increase the accuracy of our market sizing, and provide you with the volume of procedures over a 10 year range. While the below market segmentation map is representative of the United States, procedure volume data is also provided for the other regions within this complete series.