Urinary catheters are hollow plastic or rubber tubes inserted into the urethra to collect urine for patients with urinary dysfunction. Intermittent catheters are used for short-term catheterization and are segmented into a conventional, closed system and antimicrobial catheters. Foley catheters are generally used as long-term catheters and are retained by a balloon at the tip, which is inflated with water. Foley catheters are segmented into those that are sold alone or those sold as trays, as well as further segmentation between conventional and antimicrobial Foley catheters. Male external catheters are devices that fit over the penis and connect to a drainage bag. A urethral bulking agent is a hydrogel composed of a biocompatible recombinant protein polymer that is injected into the periurethral or transurethral route to treat stress urinary incontinence. Bulking agents treat urinary incontinence by increasing the tissue bulk around the urethra, thus increasing the resistance to urinary outflow. Urinary incontinence slings are devices inserted into the body to treat incontinence symptoms. This procedure is predominantly performed on females and male sling procedures are performed on a much smaller number of patients. The procedure involves placing a sling around the urethra to lift it to a position where sufficient urethral compression will achieve urine control.

*Not all segments covered in each country 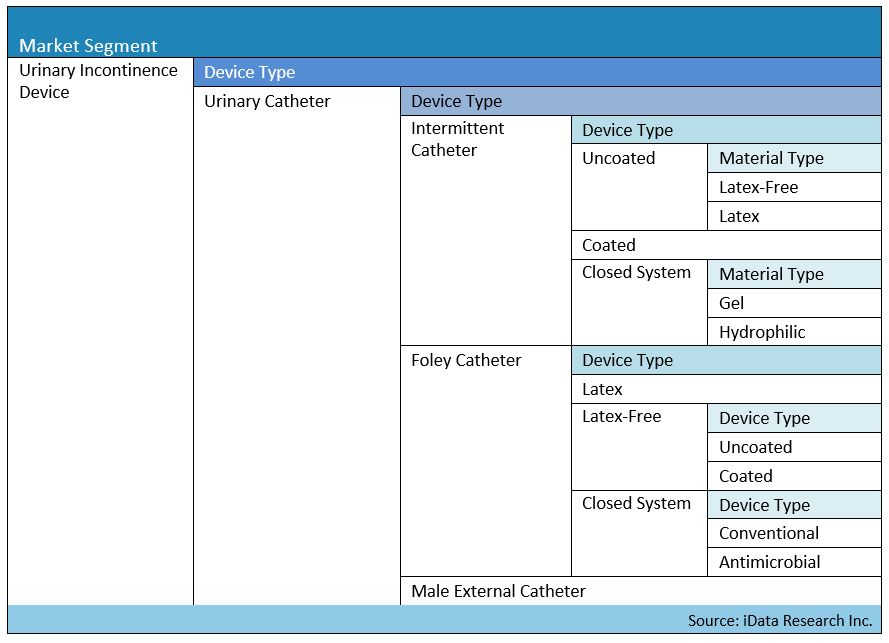 In the U.S., Japan, and China, BARD’s leading competitor in the urinary incontinence device market, with approximately 30% of the total market share. The company’s position in the overall market is solely attributed to its presence in the urinary catheter market and urinary bag market, where it held the leading positions. BARD used to be active in the urethral bulking agent market and female incontinence sling market but has since exited those segments. The company was acquired by Becton Dickinson in December 2017, and this is expected to supplement its position in the overall market.

Our analysts meticulously research for up to 3 to 4 months to put together one suite of reports (MedSuite), a comprehensive analysis of a group of healthcare markets. A MedCore is one portion of that analysis that focuses on one market segment and provides further detailed segmentation to get a much more granular set of market data.