Despite many challenges, growth is expected in many market segments, as the patient demographics in the U.S. maintain a steady demand for such procedures. Growth has slowed in the last few years as newer, minimally invasive innovations gradually cannibalized the traditional spine market. The VCF segment will be the fastest growing in the market, and will be continually driven by novel and emerging technologies.

The greatest limiting factor for the spinal fusion markets is the growth of competing technologies, including minimally invasive surgeries and motion preservation technology. Lumbar artificial discs (LADs) have not been as successful at cannibalizing thoracolumbar fixation devices as previously anticipated, due to a lack of reimbursement and unfavorable clinical results, however cervical artificial discs (CADs) have seen strong growth. Favorable reimbursement policies are expected for these devices as favorable clinical results involving newer devices emerge.

One of the key drivers for the interbody device market is the increase in the target population, which is composed of aging baby boomers. The majority of spinal fusion procedures are performed
on those individuals over the age of 60. This age group is the fastest-growing demographic in the United States. 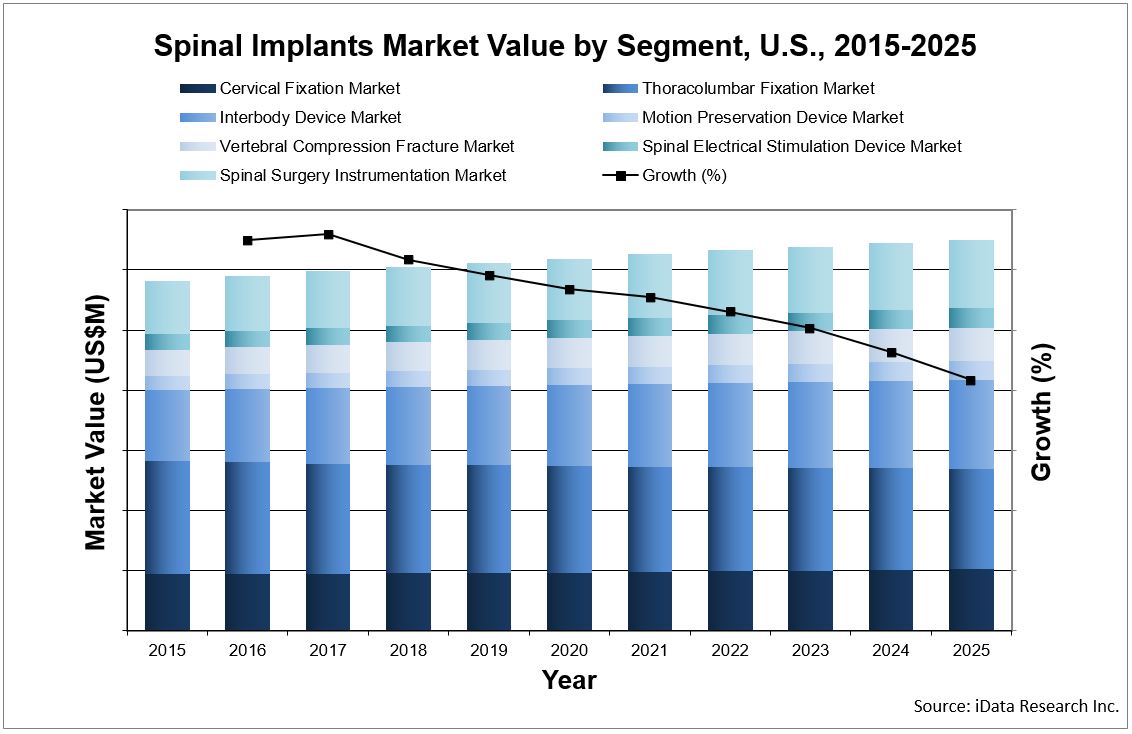 While this report suite contains all data, each of the markets are also available as stand alone MedCore reports. This allows you to get access to only the spine market research that you need. You can view these separate reports and segmentation here:

Of course, buying all of these reports together in this suite package will provide you with substantial discounts from the separate prices. Ask for a Quote to Learn More 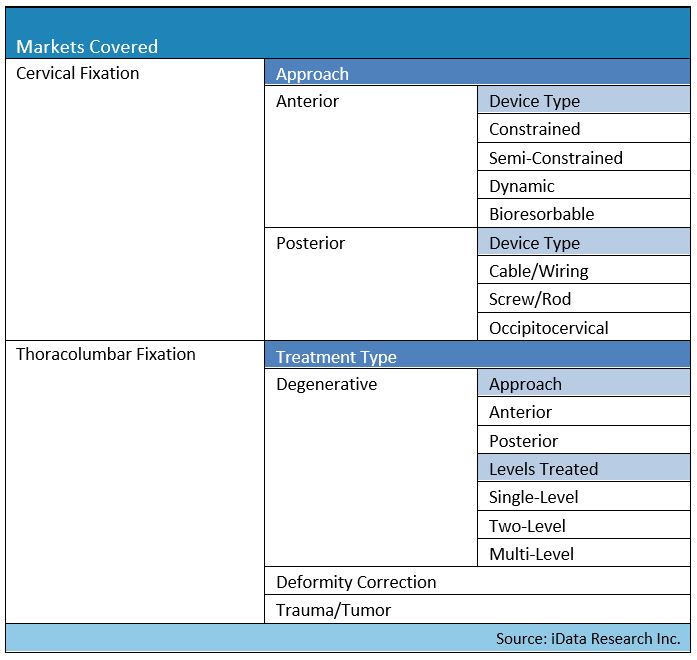 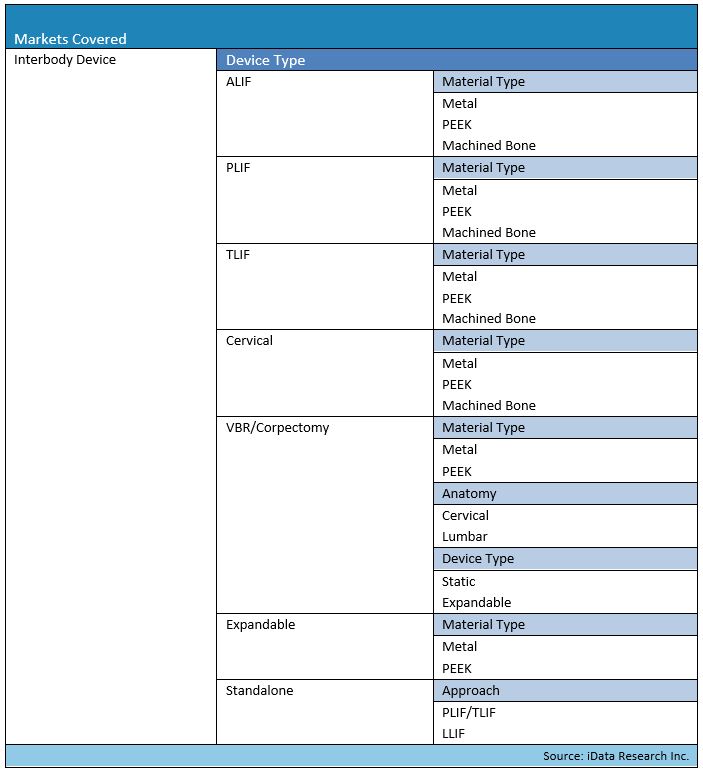 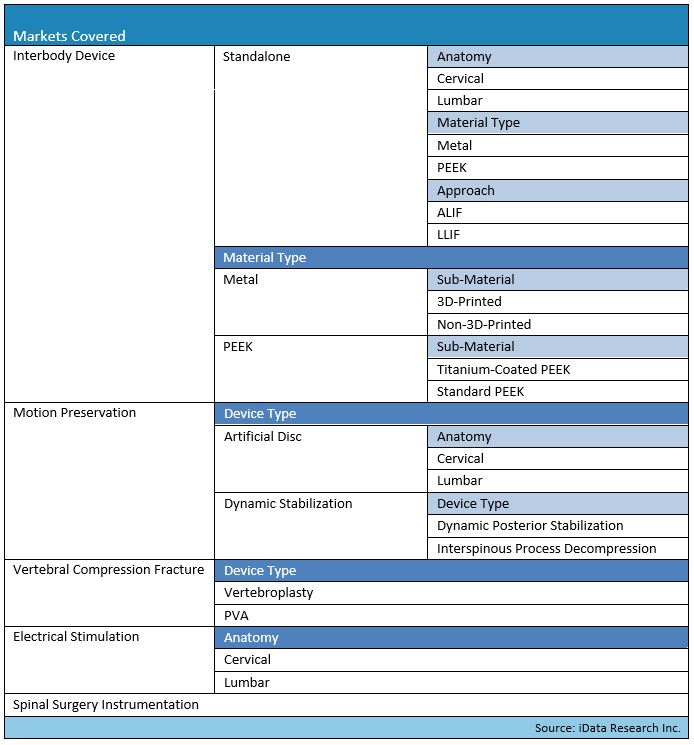 Medtronic and DePuy Synthes have been battling for the leading market share of the US and Europe spinal implants markets, with a combined market share that’s nearly half of the entire market. While Medtronic had a solid lead of the market since their acquisition of Kyphon in 2007, DePuy Synthes has come up as a contender since the merger in 2011 that created this company.

Medtronic’s strong position in the VCF market can be attributed to Kyphon’s former monopoly of the percutaneous vertebral augmentation market, with its kyphoplasty product. Medtronic also released its Prestige® CAD, one of only two CADs available on the U.S. market, in 2009. The company also launched the Bryan® cervical artificial disc in 2009; however, a soft product launch and complex surgical procedure has prevented significant growth. Medtronic’s X-STOP® is still the strongest competitor in the interspinous decompression segment. Medtronic’s leading position in the market will continually be challenged as new competitors in individual markets gradually erode the company’s share of the total market.

DePuy Synthes’ spine product portfolio contains several devices that are widely used in the spinal implant industry. The company was the market leader in the European cervical and thoracolumbar fixation and interbody device markets. DePuy Synthes gained market share from the merger between the two spine companies, increasing its market share to be just slightly behind Medtronic. DePuy Synthes is the only company with both a cervical artificial disc (CAD) and a lumbar artificial disc (LAD) on the European market: the ProDisc®-L and the ProDisc®-C.

Over 150 competitors were analyzed in this study, many of which sell products in only 1 or 2 countries.

Over 1.4 million spinal procedures are performed each year in the United States. The greatest number of procedures were performed in the cervical fixation segment, with over 350,000 total procedures. This was followed closely by interbody fusion procedures, and by thoracolumbar fixation procedures. Motion preservation was responsible for the fewest procedures. However, this was one of the fastest-growing segments in terms of procedure volumes, as reimbursement has seen favorable improvement. Overall, the U.S. spine market will continue to see low-single-digit growth over the forecast period, reaching approximately 1.6 million procedures performed by 2025.

The European market sees less than half the volume of the United States in procedures. However, in contrast to the increasing volume of motion preservation procedures in the U.S., Europe’s fastest growing segment is the vertebral compression fracture market.

There are four main types of spinal disorders that may call for traditional surgical treatment. Disorders that occur due to degradation of the intervertebral discs are referred to as degenerative disc disease (DDD). These types of disorders occur due to aggregate stresses and/or systematic problems in the vertebral body that occur over extended periods of time. The discs between vertebrae are made up of a central portion, the nucleus pulposus and an outer complex series of fibrous rings, the annulus fibrosus.

Osteoporosis is a pathophysiological condition in which bone quality is normal, but bone quantity is deficient. It is a metabolic disorder that commonly occurs in postmenopausal women in their 50s and 60s due to decreased estrogen levels, but can also occur in men, commonly in their 70s. Consequently, about 52 million Americans suffer from osteoporosis and low bone mass. Though common due to aging, osteoporosis is a serious condition that leaves an individual’s bones brittle making them vulnerable to break. As such, 20% of senior citizens who break a hip will die within one year from problems related to the breakage or from the surgery. There are a number of uncontrollable risk factors that contribute to developing osteoporosis other than low estrogen levels, for example, being over age 50, family history of osteoporosis, low body weight, previous broken bones and multiple myeloma.

For a Full Table of Contents From Any of the Country Reports in this Global Series, please Contact iData
One of the the most accurate methods of market research in the medical device industry is to analyze the procedure volumes and trends. Through this study on the spinal implants market, iData Research has performed an analysis on the following procedure segments in order to increase the accuracy of our market sizing, and provide you with the volume of procedures over a 10 year range. While the below market segmentation map is representative of the United States, procedure volume data is also provided for the other regions within this complete series. 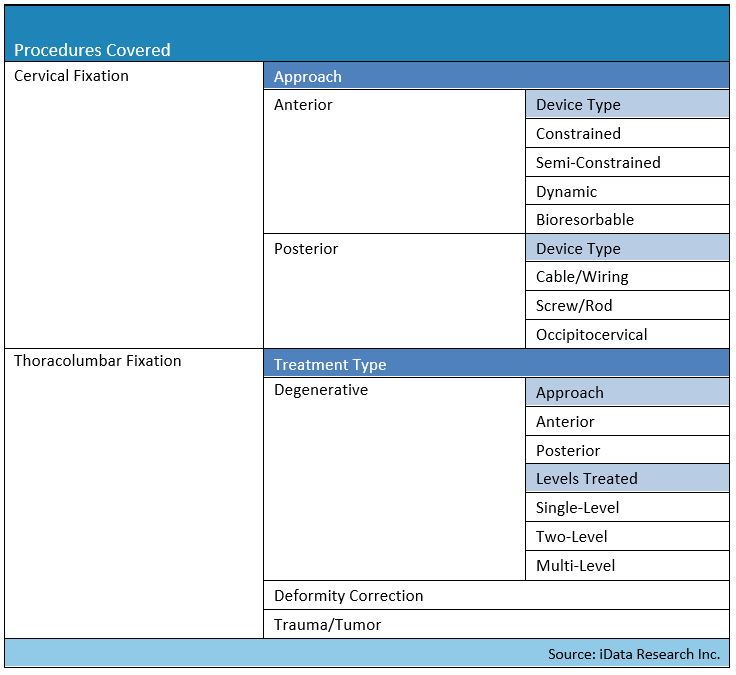 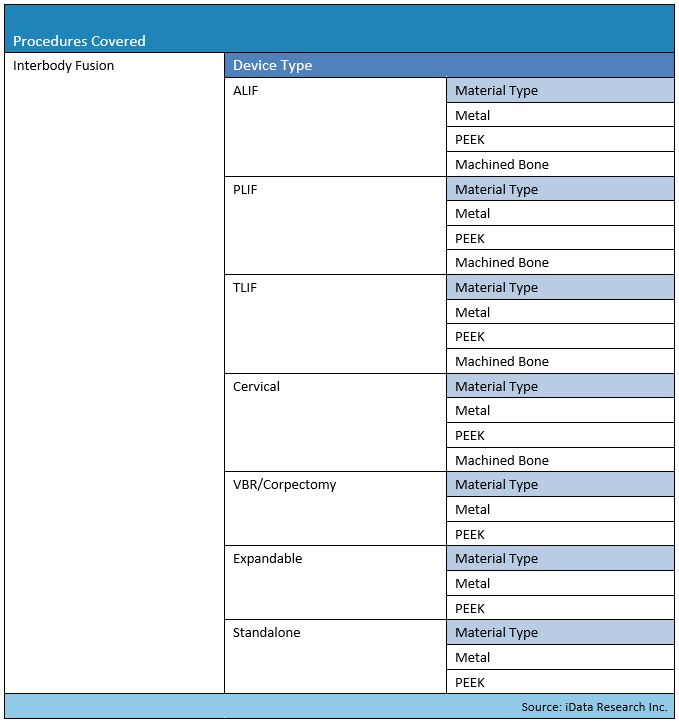 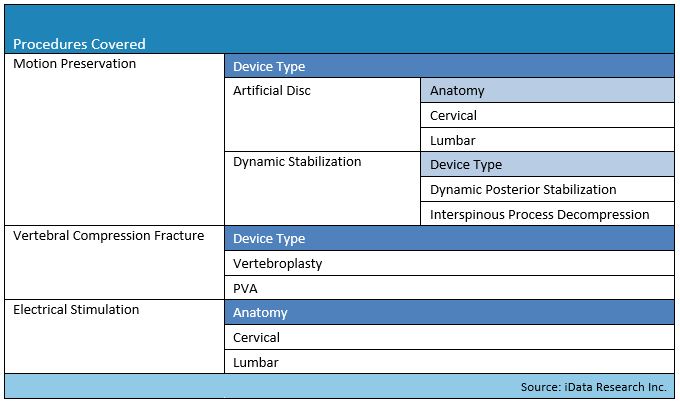