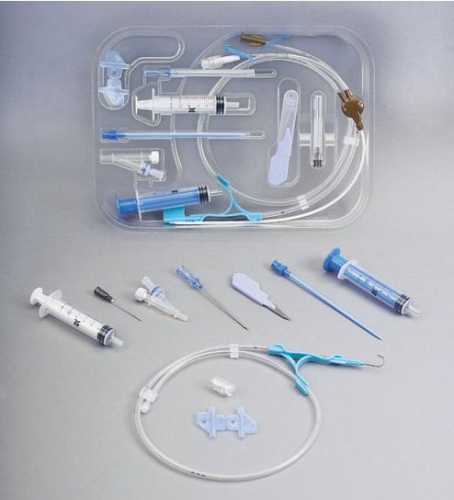 According to a new series of reports on the U.S. market for vascular access devices by iData Research, the average number of central venous catheters (CVC) kits used per successful CVC insertion is expected to decline in the next several years as the adoption of ultrasound guidance increases.

The largest CVC segment in 2017 was the acute CVC segment, which represented almost 90% of the total CVC market. The acute CVC market is a mature and stable market. While unit sales are declining, appreciating average selling prices (ASPs), due to the sales of more complex CVC kits, are driving overall market growth. The placement of alternative catheters, such as peripherally inserted central catheters (PICCs), in place of CVCs, is the main factor leading to unit sale declines. However, PICCs are not always suitable for use in all patients.

[custom_blockquote style=”eg. green, yellow, purple, blue, red, black, grey”] “The CVC market is mature in the U.S., and market growth is hampered by the high risk and severity of infections associated with the use of CVCs,” explains Jeffrey Wong, Strategic Analyst Manager at iData Research. “While there are still many cases where CVCs are the best choice for placing a central line, alternatives such as PICCs are being increasingly used.” [/custom_blockquote]

The total CVC market includes acute and chronic CVCs. Acute CVCs are segmented into conventional, antimicrobial and multi-lumen devices. Antimicrobial acute CVCs can be further categorized as antiseptic or impregnated devices. While total CVC unit sales are decreasing, market value growth will be driven by the increased sales of more expensive antimicrobial and multi-lumen CVCs. CVC kits are becoming increasingly complex because of recommendations from the Centers for Disease Control and Prevention (CDC), which is driving the cost of these devices up. The increasing penetration rate of premium-priced antimicrobial CVCs is also inflating the total ASP.

Teleflex Medical is the market leader in the total U.S. CVC market. Teleflex is present in both the acute CVC and chronic CVC segments. The company has dominated the acute CVC segment since 2007, when it acquired Arrow International and its conventional, coated and impregnated catheter product lines. Teleflex entered the chronic CVC market in September 2013 with the launch of the ARROW® JACC (Jugular Axillo-subclavian Central Catheter) with Chlorag+ard® Technology. Teleflex’s market share is solely based on its sales of Arrow products, as it did not previously manufacture CVCs. With Teleflex’s strong sales in antimicrobial catheters, it will likely maintain its leading market share as the industry continues its shift towards antimicrobials.

We have built a reputation and earned our clients’ trust based on consistent and uniquely intelligent research that allows our customers to make confident decisions and impact their businesses. A combination of market expertise and over a decade of experience has resulted in a deep understanding of the medical device industry that has inspired innovation and propelled our clients to success.