In 2019, the global syringe and needle market size was valued at $6.8 billion, with the majority of the market size occupied by the needles segment. The global market size is set to expand partially due to the COVID19 pandemic and exceed $7.5 billion in 2026.

In North America and Europe, the majority of the syringe and needle market share was controlled by Becton Dickinson. Overall, this global market research includes an analysis of both syringe and needle companies spawning across more than 70 countries in the world.

Two of the largest global markets for syringes and needles are Europe and North America. The value of the North American syringe and needle market is expected to grow modestly over the forecast period. Market declines will be driven by a contraction in unit sales but limited by mild average selling prices (ASPs) appreciation. Unit sales declines in the insulin syringe segment will apply downward pressure on unit sales of the total syringe market in North America. This trend is moderating but will continue to exert downward pressure on the unit sales of the total syringe market over the next 6 years. 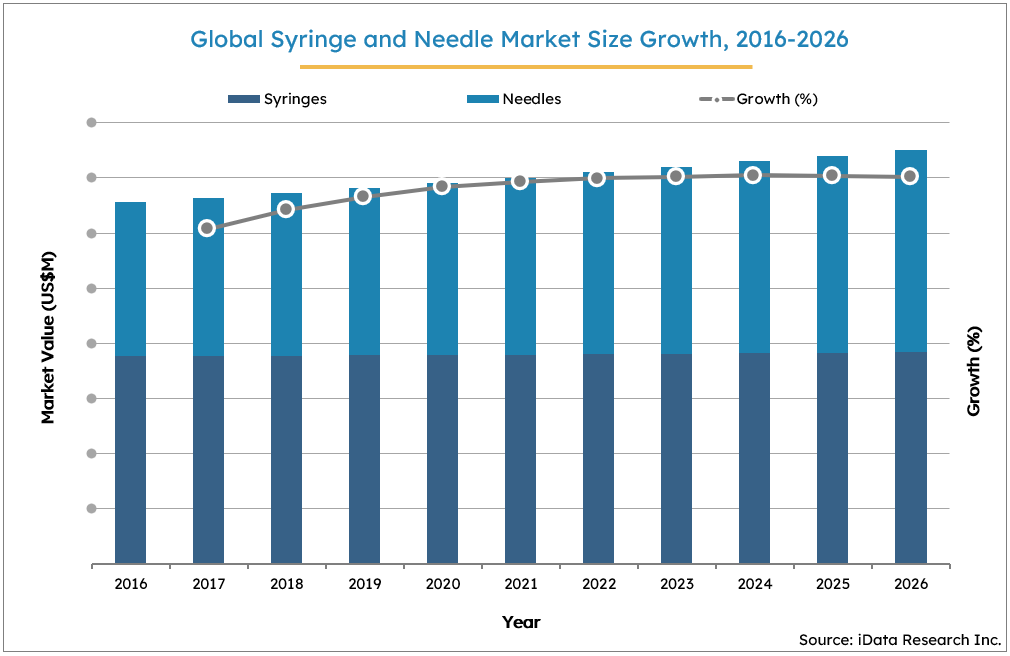 In the European region, the majority of syringes and needles are sold separately and combined when used, but there are some unique markets, such as Italy. In these markets, high sales of syringes and needles already attached make the standalone market small by comparison. The implementation of the directive by the Council of the European Union, which aims to reduce needlestick injuries, is leading to a significant conversion from conventional to safety needles. In addition to the conversion to premium-priced safety needles, the use of two needles instead of one is leading to an increase in unit sales.

In Europe, B. Braun was the second-leading competitor in the syringe and needle market. The company has gained significant market share in the past several years, especially in regions such as Germany, France, and the United Kingdom.

Throughout this research series, iData Research has covered over 70 countries across the globe in great detail. Each global region may be purchased as a stand-alone report, tailoring the data to your needs. The regions covered are:

For full segmentation and any questions regarding research coverage, please contact us or send a request by pressing one of the buttons below.

Please reach out to iData Research for a Custom Sample and Table of Contents for the Global Syringe & Needle Market Analysis.
The Syringe and Needle Market Report Suite| Global | 2020-2026 | MedCore includes analysis on the following companies currently active in this market:

iData’s global syringe and needle market MedCore covers both the needle market and the syringe market. Medcores include a highly detailed and in-depth look at a segment in a market with all the associated sub- and sub-sub segments. iData MedCore reports allow users to delve deep into a specific market in order to obtain units sold, average selling prices (ASPs), market values, growth rates, a 10-year forecast including historical and future market estimates, and competitor market shares of any given market segment.