Soft tissue repair devices are gaining popularity in the U.S. due to the rising awareness of their clinical history among surgeons. Furthermore, the growing and aging population, and the associated demand for soft tissue repair procedures, are expected to fuel the expansion of the soft tissue augmentation and reinforcement device in the U.S. and European market.

Recently in the European market, hybrid devices have begun to emerge, which are combinations of synthetic and biologic materials. These devices blur the lines between the traditional segmentation of soft tissue repair devices, but have not become common enough to warrant their own segment as of yet.

In the U.S. Laparoscopic devices market, the dental soft tissue regeneration segment, while having the smallest market value of all the segments, featured the highest overall growth out of all the segments. This growth was due primarily to increases in sales volumes, based on the ongoing expansions of indication of regenerative devices in this segment, as well as the inclusion of the fast-growing wound care market. 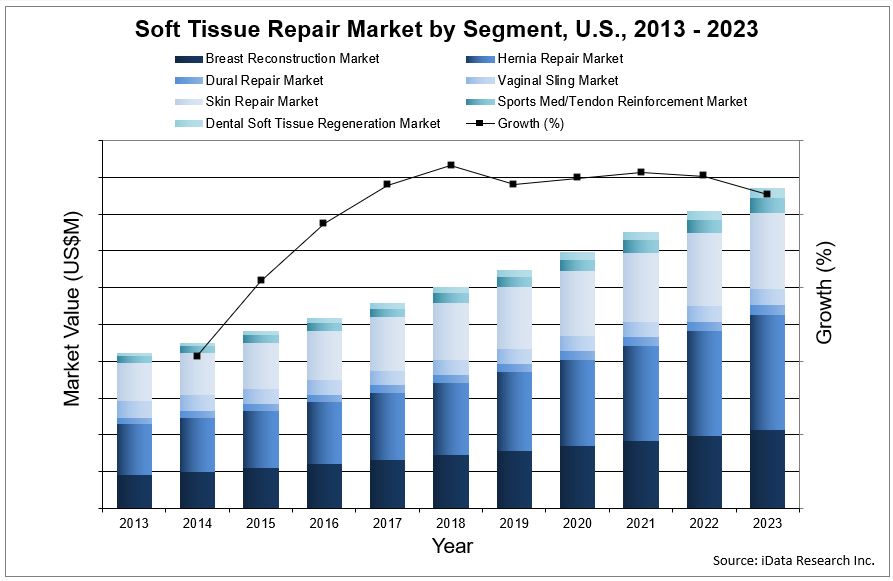 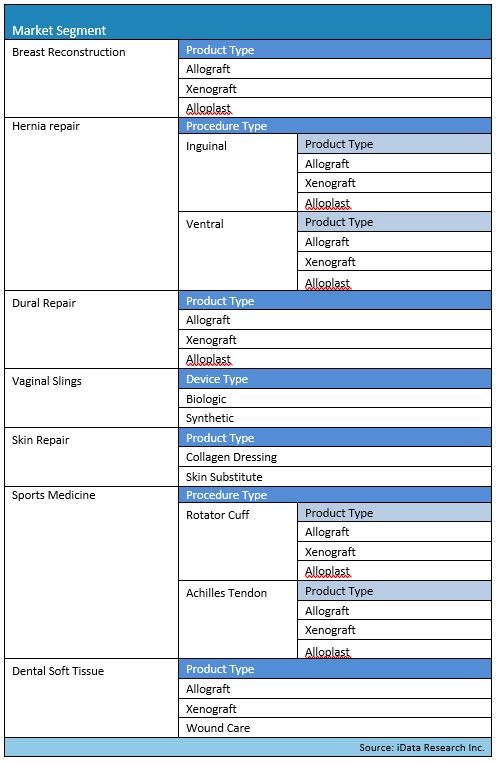 In the soft tissue repair market, the leading competitor is Acelity, or more specifically LifeCell, one of their subsidiaries. In second and third place respectively were C. R. Bard and Ethicon. The majority of LifeCell’s revenue in the U.S. is derived from the clinical applications of challenging hernia repair and post-mastectomy breast reconstruction, which is generated primarily in the acute care setting on a direct billing basis. In the U.S., the company’s success arises from both the allograft and xenograft areas of the soft tissue repair market, as the company doesn’t have any alloplast products. In Europe, LifeCell’s signature human-based AlloDerm® soft tissue product is one
of the most well-known products in the industry and continues to remain the most popular choice among surgeons today. Recent developments regarding the company’s other flagship xenograft product, Strattice™, have resulted in significant shifts in market share.

In the U.S., C. R. Bard is among the top three overall competitors, thanks to its vast array of products used
in various applications across different market segments. The company’s broad range of hernia repair products allow it to be the top player in this market.

Medtronic, Ethicon and C.R. Bard all compete closely in the synthetic portion of the European soft tissue market, thanks to their vast array of products used in various applications across different market segments. All three companies offer a broad range of hernia repair products made of various materials and designed for myriad different types of hernias. C.R. Bard, specifically, offers many synthetic mesh products that have been on the market for decades and are well trusted by physicians throughout Europe.

In Europe, over 1.39 million soft tissue repair procedures are being performed annually.

The incidence of breast cancer in younger women has been increasing in the United States; this population is more likely to opt for both mastectomy and breast reconstruction. The vast majority of breast reconstructions were tissue expander/implant–based (TEI) reconstructions. The remaining procedures were performed with autologous tissue, using techniques such as latissimus dorsi myocutaneous (LDM) flap, deep inferior epigastric perforators (DIEP) flap and transverse rectus abdominis myocutaneous (TRAM) flap.

For a Full Table of Contents From Any of the Country Reports in this Global Series, please Contact iData
One of the the most accurate methods of market research in the medical device industry is to analyze the procedure volumes and trends. Through this study on the soft tissue repair market, iData Research has performed an analysis on the following procedure segments in order to increase the accuracy of our market sizing, and provide you with the volume of procedures over a 10 year range. While the below market segmentation map is representative of the United States, procedure volume data is also provided for the other regions within this complete series. 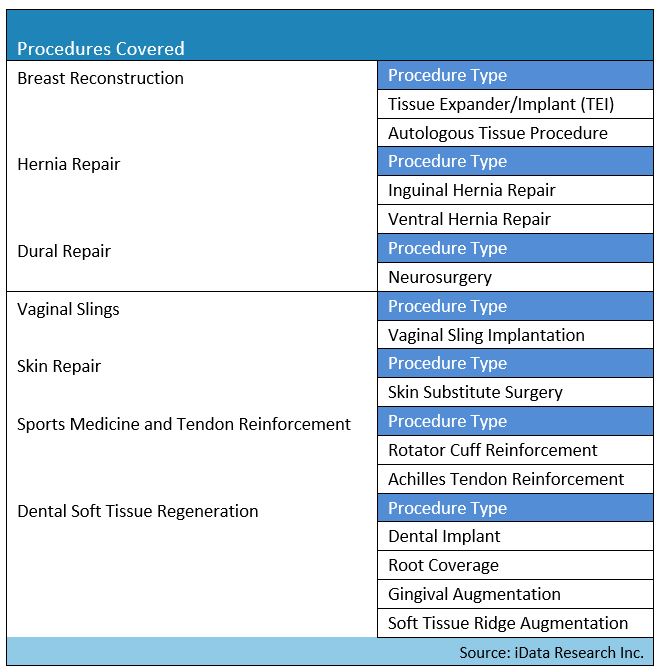