One of the main trends in the large joints devices market is a shift towards personalized orthopedic solutions that maximally adjust to the specific anatomical and clinical needs of each individual patient. While it is believed by some that application of an emerging 3D printing technology may potentially make manufacturing of the actual custom implants more cost-effective in a long-term, the area of a particularly growing interest in the orthopedic industry is creating personalized instrumentation which allows to improve the positioning precision of the off-the-shelf implants. The personalized instrumentation market is expected to grow rapidly over the forecast period.

Hospital buyers continue to apply a downwards price pressure in the large joint device market, which decelerates adoption of the new innovative products that often increase the overall cost of
the procedure. The price declines in the U.S. could be potentially stabilized by Ambulatory Surgery Centers (ASC), as their role in the orthopedic industry is becoming increasingly prominent. ASCs, where the procedure efficiency and fast patient recovery are particularly important, tend to adopt new developments faster than hospitals.

There have been consistent pressures on pricing across Europe, due to the economic climate in recent years. While such pressures have lessened, there is no room for increases in average selling
prices without new technology. Technological innovation is slow in the mature large joint device market and presents greater opportunities in the field of personalized instrumentation, which
allows for improved positioning precision in off-the-shelf implants. The adoption rate of new technologies, such as additive manufacturing, robotics and intelligent instrumentation in the cost conscious European market will become clear after more medium and long-term clinical data is gathered and the theoretical benefits of these technologies have been tested. 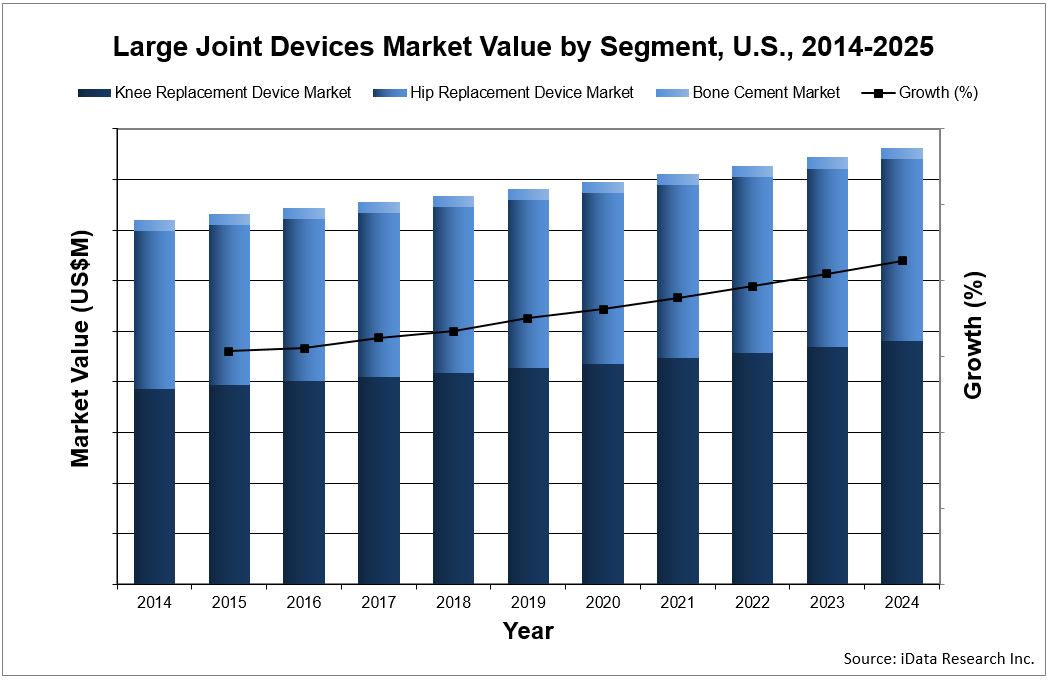 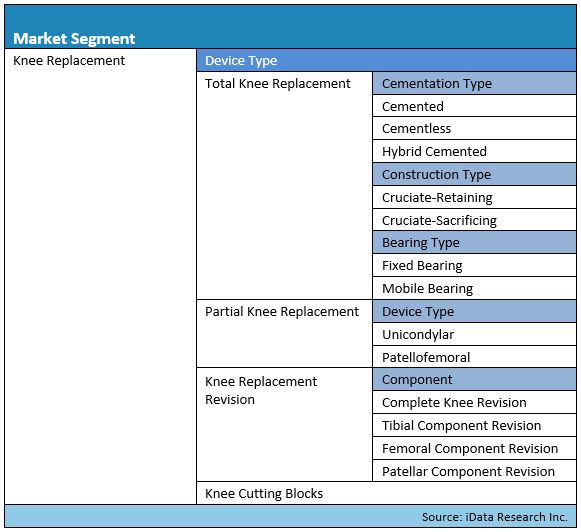 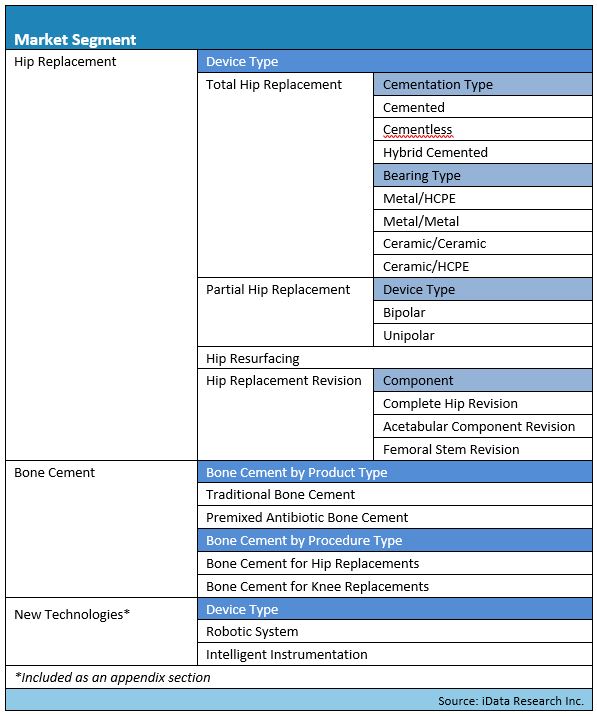 The competition level in the European large joint replacement market is much greater than that of the United States, with over twice as many major competitors. However, Europe is significantly led by Zimmer Biomet, DePuy Synthes, Stryker, and Smith & Nephew. These 4 competitors make up more than two-thirds of the European market. It’s interesting to note, the United States market also sees these 4 main players as the leading competitors.

Zimmer Biomet led the overall U.S. and European large joint device market. Following their merger in 2015, the combined entity of the former Zimmer Holdings and Biomet Inc. held the lead in both hip and knee replacement devices, while trailing behind Stryker in bone cement in the United States. The merger caused both entities to sell off assets to comply with antitrust regulations. Although Zimmer Biomet remained the market leader in the large joint device market, its sales in both the U.S. knee and hip replacement segments declined slightly in 2017, as a result of supply issues related to production delays from the company’s Warsaw North Campus facility.

Looking into the Asia-Pacific countries, the local competition starts to become more significant, particularly from manufacturers like Kyocera in Japan, AK Medical in China, and Maxx Medical in India.

There are nearly 1.6 million hip and knee arthroplasties in the United States every year. This number is expected to grow over the forecast period, due to the aging baby boomer population, the increasing number of highly active individuals and a rising obese demographic. An increasing number of younger patients undergoing large joints arthroplasty is also expected to contribute to the procedural growth. The fastest procedural growth in the large joint replacement device market was in knee replacement procedures, particularly within the knee replacement revision procedures segment.

Surprisingly, there are nearly the same number of hip and knee arthroplasties in Europe. This number is expected to grow over the forecast period as well due to the similar United States and global factors.

Osteoarthritis is the most prevalent joint disease and the most common form of arthritis. According to a study by Vos T et al. published in 2010, knee osteoarthritis was reported to account for more than 80% of the disease’s total burden.

Based out of the Centers of Disease Control and Prevention (CDC), a survey conducted in the United States in 2015 reported a slightly higher diagnosis of arthritis in females (23.1%) than in males (18.6%), with an increasing prevalence in older populations. While it is more common in the over-50 population, younger populations with exceptionally high wear rates from activity or pathology are also susceptible to osteoarthritis. Nearly half of the affected population are under the age of 65, including an estimated 300,000 children.

For a Full Table of Contents From Any of the Country Reports in this Global Series, please Contact iData
One of the the most accurate methods of market research in the medical device industry is to analyze the procedure volumes and trends. Through this study on large joint devices, iData Research has performed an analysis on the following procedure segments in order to increase the accuracy of our market sizing, and provide you with the volume of procedures over a 10 year range. While the below market segmentation map is representative of the United States, procedure volume data is also provided for the other regions within this complete series. 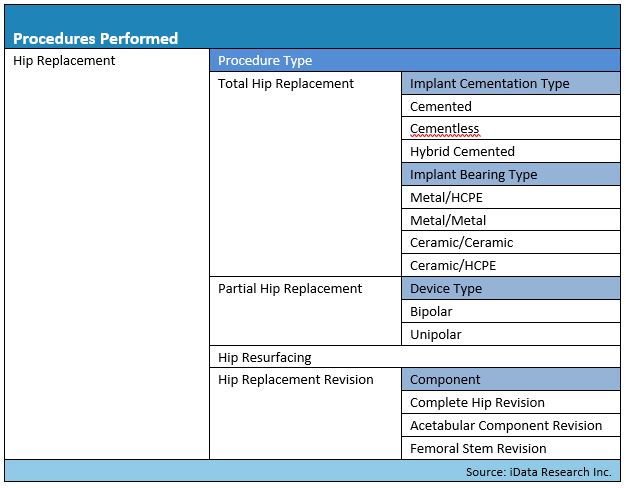 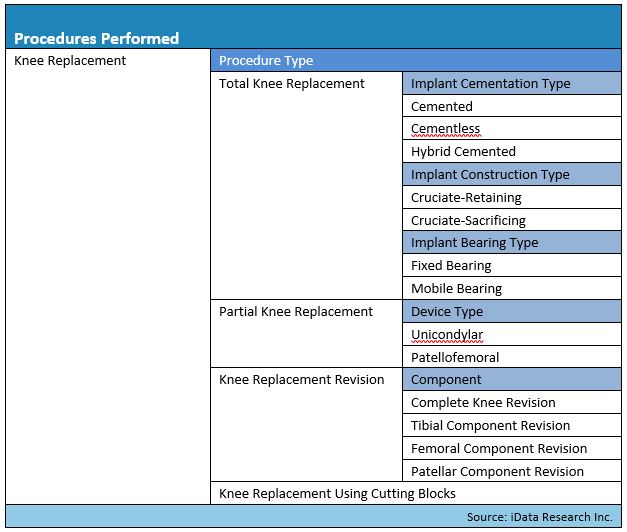