Cost-cutting measures at hospitals and surgery centers continue to drive down the ASPs of the hip replacement market. The long-term market growth will be primarily driven by patient demographics, characterized by an ever-growing aging population and an increasing number of younger patients.

Despite steady growth in procedure volumes in the United States, growth in the market value of all segments and subsegments of the overall hip replacement market is stymied by the offsetting price cuts throughout the U.S. healthcare system. The fastest-growing segments of the total hip replacement market were represented by implants with ceramic heads and HCPE liners, as well as by cementless devices in the U.S. An increasing acceptance of cementless implants, which allow for a reduction in surgical time compared to cemented alternatives, will be further driven by an overall industrial shift towards outpatient settings, as more hip replacement procedures are expected to be performed in ASCs.

A primary total hip replacement (THR) replaces the entire hip joint. THR implants typically have three components: a stem, a head and an acetabular cup. Partial implants replace only the femoral or acetabular side of the joint. This form of procedure is known as hemiarthroplasty. These devices are colloquially known as hemis within the industry and are often modular components of total implant systems. Resurfacing is an alternative form of implantation to total joint replacement. Rather than removing the entire femoral head, a cap with a short stem is placed onto the bone. This allows for greater preservation of bone stock over a THR and also has the advantage of being easier to revise when the resurfacing implant becomes worn. Revision implants become necessary when original implants of any type become worn over time or through pathology. A conservative estimate of the viability of any implant is approximately 15 years. Revision devices are not significantly different than the original primary total replacements, but the stems may be longer to aid fixation within the femur. 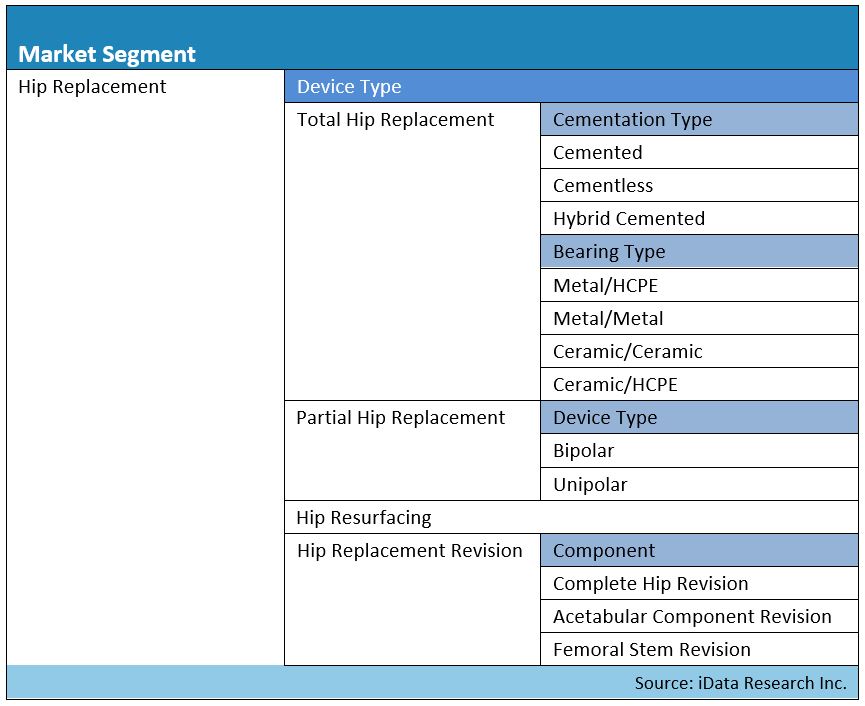 Through the hip replacement device market, Zimmer Biomet is the clear leader, particularly in Europe, where they command nearly one-third of the market themselves. In the United States, Zimmer is closely followed by Depuy Synthes, Stryker, and Smith & Nephew, the other prominent players in the major regions. The market in Europe is significantly more fragmented, with these top companies commanding just over three-quarters of the market, whereas in the United States, these companies make up over 85% of the market.

Although Zimmer Biomet remains a market leader in the large joint device market, their sales in both the knee and hip replacement markets declined slightly in 2017 as a result of supply issues related to production delays from the company’s Warsaw North Campus facility. The company benefited from the issues associated with the use of metal-on-metal hip implant systems, since their product line offers alternatives to these bearing types. Zimmer Biomet’s strong market share was largely attributed to the sales of their Taperloc® Hip System, Arcos® Modular Hip System and G7® Acetabular System, as well as the Continuum™ Acetabular System, which is available in various bearing types.

Throughout this global study, iData’s team of analysts researched nearly 50 companies, the whole list is included below: