Foot and ankle medical devices are used to treat a variety of indications, including hallux rigidus, arthritis, Lisfranc fractures and pes planus (flatfeet) to name a few. The devices included in this study are those for the ankle joint, hindfoot, midfoot and forefoot and toe digits. Ankle devices, which include total ankle replacements, ankle intramedullary nails, ankle plate and screw systems and ankle external fixators, are used to treat arthritis of the ankle or traumatic ankle injuries.

There has been an increase in the number of foot and ankle specialists in Europe, which contributed to growth in the foot and ankle device market, particularly in the forefoot and midfoot fixation segment. In general, foot and ankle fixation and reconstruction procedures are more frequently performed in Germany, France, Italy and the United Kingdom. This is due to the higher number of surgeons that specialize in foot surgery in these countries.

*Not all segments covered in each country 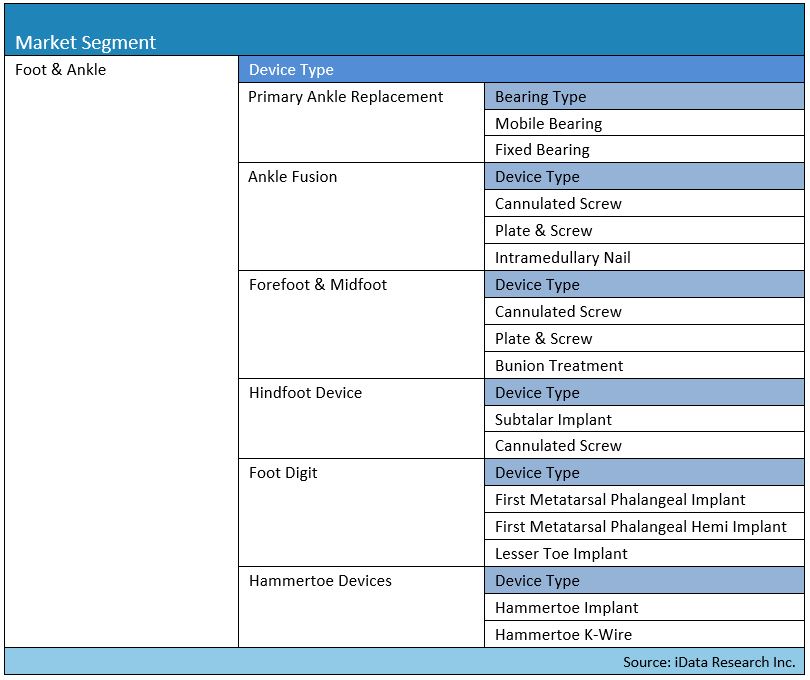 Wright Medical has grown strongly in the foot & ankle market. Wright Medical offers products in every segment of the foot & ankle market. They held the largest shares in the ankle fusion, hindfoot device, forefoot & midfoot fixation and hammertoe device markets. Following Styker’s acquisition of SBi, Stryker has strengthened its presence in the ankle replacement market segment. Their share in the primary ankle replacement market increased due to sales of their STAR ankle, currently the only three-piece mobile bearing ankle implant with FDA approval in the United States. DePuy’s product portfolio in the forefoot & midfoot fixation is strong.

Please ask for a table of contents for other regions with this series of research.