The majority of these U.S. female and neonatal diagnostic devices market segments will see stable growth throughout the forecast period of this report. The largest segment of this market was represented by breast imaging. This is primarily due to the large number of screening procedures performed with these devices, which add to the demand of the devices as well as the introduction of new technologies such as digital breast tomosynthesis (DBT) and automated breast ultrasound (ABUS). As the population ages, the incidence of cancer increases, thus increasing the demand for breast cancer screening. Moreover, there has been a push towards newer and more expensive devices with increased detection capabilities, tissue versatility and lower radiation doses as well as increasing public awareness about the importance of screening.

In the Europe female and neonatal diagnostic devices market, the well-established and mature OB/GYN ultrasound segment will continue to dominate this market throughout the forecast period. This will be followed by the breast imaging segment, representing just over a quarter of the overall market. The markets expected to experience a net growth over the forecast period are the breast biopsy market as well as the infant warmer and incubator market. The increasing average age of the European population as well as technological advances will improve growth in the breast biopsy market. 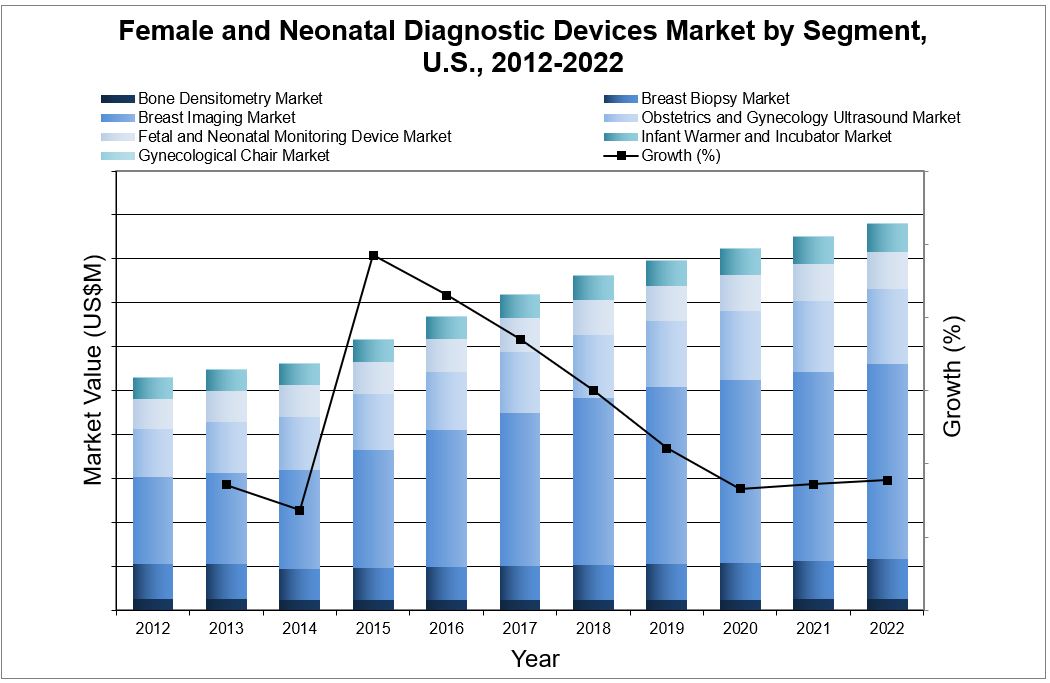 Hologic was the leading competitor in the U.S. female and neonatal diagnostic device market. This company has a significant presence in the U.S. breast health market and is known for its commitment to women’s health and innovative products. At one time Hologic held sole possession of the DBT market. Although two additional companies now have FDA approval, Hologic’s early establishment in the market has led to its continued dominance.

GE Healthcare was the second leading competitor in the U.S. market for breast imaging. GE Healthcare was also the second leading competitor in both the digital breast tomosynthesis and digital radiography mammography segments. This company has been producing mammography systems for over 50 years and is focused on developing accurate, efficient and patient-friendly breast imaging products.

In the European market, GE and Hologic are major players, but more so in the done densitometry market. However, the downturn in this market has
allowed smaller competitors, such as Cooper Surgical’s Norland

There are over 4.5 million DXA procedures being performed annually in the U.S.  Central DXA procedures accounted for a large portion of DXA procedures at 98%. The ratio of Central DXA procedures will remain steady over the forecast period as the market is well developed with few changes. Despite predicted market growth, procedure numbers as reported are predicted to decline. This contradiction can be attributed to two factors; firstly these procedures do not take into account central DXAs being used in the body composition market which is a major driver for potential market growth, and secondly, the procedural data also excludes ultrasonometers which are a larger portion of the peripheral bone densitometry market.

In the U.S. market, there are more than 1.7 million breast biopsy procedures being performed annually.  There are over 17 million OB/GYN ultrasounds performed in the U.S. Despite a decrease in birth rate in the U.S., a major shift towards a more mature maternal pregnancy age will help offset any decreases in obstetrics imaging due to reduced birth and pregnancy rates. Moreover, as the population is aging, more gynecological procedures to examine abnormalities in the uterus will be required. The largest driver of this market, however, seems to be consumer choice rather
than medical necessity. With the wide availability and ease of access to ultrasound equipment, many patients are requesting ultrasounds for non-medical reasons such as bonding or scrap booking.