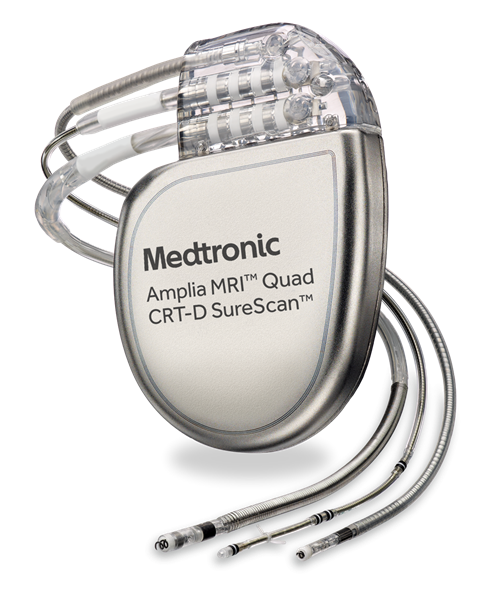 Medtronic Canada, a subsidiary of Medtronic plc, recently announced it has received a Health Canada licence and is launching its first and only magnetic resonance imaging (MRI) conditional cardiac resynchronization therapy defibrillators (CRT-Ds) for heart failure. Heart failure causes or contributes to an estimated 290,000 deaths per year. The Medtronic Amplia MRI Quad CRT-D SureScan™ and Compia MRI Quad CRT-D SureScan™ systems are licenced for MRI scans on any part of the body without positioning restrictions. Now, patients in Canada with these devices have access to MRI scans if and when they need them. Both CRT-D systems are commercially available in Canada.

Known as one of the world’s largest and leading cardiac device manufacturer, Medtronic was the first company to receive a Health Canada licence for MR-conditional pacemakers (2011) and implantable cardioverter defibrillators (ICDs) in 2015, and now CRT-D devices.

Until now, CRT-Ds have been contraindicated for MRI scans because of the potential interaction between the MRI and the device, resulting in risk to patients. However, patients with pacemakers have a 50-75 percent likelihood of needing an MRI over the lifetime of their device. As a result, thousands of heart failure patients implanted with CRT-Ds have not had access to MRI scans, which are used to diagnose conditions such as stroke, cancer, Alzheimer’s disease, and muscle, bone and joint pain.

The Amplia MRI device features the AdaptivCRT™ algorithm, which has been shown to reduce a patient’s odds of a heart failure hospital readmission (within 30 days) by 59 percent (versus echo-optimized CRT). The AdaptivCRT feature also has been shown to improve CRT response rate by 12 percent, and to reduce AF risk by 46 percent compared to echo-optimized BiV pacing. The Amplia MRI device also enables Multi-Point Pacing which can stimulate two sites on the left ventricle (lower chamber) simultaneously. Pacing from two LV electrodes provides another option for clinicians.

Both newly licenced devices can be paired with the Attain™ Perfoma™ MRI SureScan™ Quadripolar Leads, of which the entire portfolio is licenced for MRI scans: Dual Cant MRI SureScan™ Model 4298, Straight MRI SureScan™ Model 4398 and S MRI SureScan™ Model 4598. With 16 pacing configurations and shorter spacing between the two center electrodes, these quadripolar leads have been shown to reduce the incidence of phrenic nerve stimulation (PNS), a potential issue that results in muscle twitching, hiccups or shortness of breath. Attain Performa leads also include steroid on all four electrodes for lower chronic pacing thresholds, which contribute to greater device longevity and reduce the likelihood of PNS. The systems also include VectorExpress™ technology, an automated in-office test that reduces lead programing to two minutes, and reveals clinically actionable information to help physicians select optimal pacing configurations for each patient.

“The ability to undergo an MRI scan is a vital consideration for patients,” said Michael Blackwell, senior director, Cardiac and Vascular Group at Medtronic Canada. “Our CRT-D class of devices provides a comprehensive range of options for physicians, and removes the barrier to MRIs for heart failure. Together with the rest of our proven MRI conditional portfolio, we continue delivering on our commitment to provide cardiac patients with the latest technology.”

In collaboration with leading clinicians, researchers and scientists worldwide, Medtronic offers one of the broadest ranges of innovative medical technology for the interventional and surgical treatment of cardiovascular disease and cardiac arrhythmias. The company strives to offer products and services that deliver clinical and economic value to healthcare consumers and providers around the world.