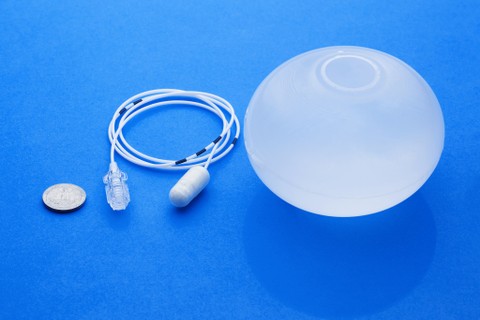 Natick-based Allurion Technologies has developed a swallowable gastric balloon and is seeking patients for a clinical study of the device.

Holyoke Medical Center Weight Management Program is screening candidates in this area of the country to try the device, which is marketed under the trademark “Elipse.”

Those interested in the study must have a Body Mass Index of 30 or over, which is considered in the obesity range.

Allurion hopes the device, which is temporarily placed in the stomach to take up space and expelled naturally after four months, will be approved by the Food and Drug Administration for use in the United States. The system, which differs from other gastric balloon devices as it does not involve endoscopy surgery for placement or removal, and is not permanent as some forms of bariatric surgery are for weight loss, was approved for marketing in Europe in 2015.

A board certified bariatric surgeon who founded HMC’s weight management program in 2016, Dr. Yannis Raftopoulos said his program is one of 12 sites involved in the U.S. study, what he said is a randomized controlled one, and the only site in the Northeast. Raftopoulos has already placed the device in patients in Greece, and participated in a European study for it funded by Allurion. He was one of two lead investigators in that 2015 study, involving some 34 patients in the Czech Republic and Greece, and whose results he presented at a number of conferences both in this country and abroad. Raftopoulos said that study, which was not randomized controlled, showed the device to be “safe and effective” and resulted in “no serious complications.”

“We only observed usual and expected side effects after placement such as nausea, occasional vomiting, reflux and cramps which usually resolved in three to four days,” Raftopoulos said.

He said the device’s novelty is that it “requires no anesthesia, sedation, endoscopy or surgery.”

“The balloon is packaged into a small capsule and is swallowed with some water under Xray. It is filled with water (through a thin delivery catheter that is then removed). The placement takes 10 to 14 minutes. It works by occupying a space in the stomach resulting in less appetite and increased satiety,” Raftopoulos said. “The balloon has a release valve which is programmed to open at 16 weeks allowing the balloon to empty from the water and pass in the stool. If required it can be punctured endoscopically and be removed without difficulty. I had to remove it prematurely and electively in one patient who was not able to take enough fluids and nutrition three weeks after placement.”

Raftopoulos described what the balloon is made from as a “patented multi-layer material strong enough not to dissolve from the gastric acidity and flexible enough to be able to be packaged within a small capsule. It’s 85 percent thinner than existing balloons,” Raftopoulos said.

The iData report series on laparoscopic devices covers the U.S. and 15 countries in Europe including Germany, France, the United Kingdom (U.K.), Italy, Spain, Benelux (Belgium, Netherlands and Luxembourg), Scandinavia (Finland, Denmark, Sweden and Norway), Portugal, Austria and Switzerland. Reports provide a comprehensive analysis including units sold, market value, forecasts, as well as detailed competitive market shares and analysis of major players’ success strategies in each market and segment. To find out more about laparoscopic device market data, register online or email us at info@idataresearch.net for a U.S Market Report Suite for Laparoscopic Devices brochure and synopsis.