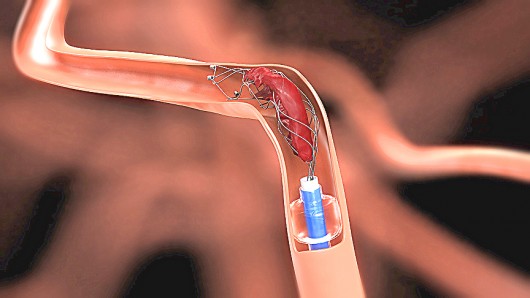 The U.S. Food and Drug Administration today cleared the use of the Trevo clot retrieval device to treat certain stroke patients up to 24 hours after symptom onset, expanding the device’s indication to a broader group of patients. This device is cleared for use as an initial therapy for strokes due to blood clots (also known as an acute ischemic stroke) to reduce paralysis, speech difficulties and other stroke disabilities and only as an addition to treatment with a medication that dissolves blood blots called tissue plasminogen activator (t-PA). The device was previously cleared for use in patients six hours after symptom onset.

[custom_blockquote style=”eg. green, yellow, purple, blue, red, black, grey”] “Time is critical following the onset of stroke symptoms. Expanding the treatment window from 6 to 24 hours will significantly increase the number of stroke patients who may benefit from treatment,” said Carlos Peña, Ph.D., director of the division of neurological and physical medicine devices at the FDA’s Center for Devices and Radiological Health. “Health care providers and their patients now have better tools for treating stroke and potentially preventing long-term disability.”[/custom_blockquote]

A stroke is a serious medical condition that requires emergency care and can cause lasting brain damage, long-term disability or even death. According to the Centers for Disease Control and Prevention, stroke is the fifth leading cause of death in the U.S. and is a major cause of serious disability for adults. About 795,000 people in the U.S. have a stroke each year. Ischemic strokes represent about 87 percent of all strokes.

The Trevo device was first cleared by the FDA in 2012 to remove a blood clot and restore blood flow in stroke patients who could not receive t-PA or for those patients who did not respond to t-PA therapy. In 2016, the FDA allowed expanded marketing of the device for certain patients in addition to treatment with t-PA if used within six hours of the onset of symptoms. Today’s expanded indication increases the amount of time that the device can be used once the symptoms are present. Trevo is a clot removal device that is inserted through a catheter up into the blood vessel to the site of the blood clot. When the shaped section at the end of the device is fully expanded (up to three to six millimeters in diameter), it grips the clot, allowing the physician to retrieve the clot by pulling it back through the blood vessel along with the device for removal through a catheter or sheath.

Trevo was reviewed through the premarket notification (510(k)) pathway. A 510(k) is a premarket submission made by device manufacturers to the FDA to demonstrate that the new device is substantially equivalent to a legally marketed predicate device. The FDA granted premarket clearance of the Trevo device to Concentric Medical Inc.

The iData series on the market for neurological devices covers the U.S. and 15 countries in Europe including Germany, France, the United Kingdom (U.K.), Italy, Spain, Benelux (Belgium, Netherlands and Luxembourg), Scandinavia (Finland, Denmark, Sweden and Norway), Portugal, Austria and Switzerland. Reports provide a comprehensive analysis including units sold, procedure numbers, market value, forecasts, as well as detailed competitive market shares and analysis of major players’ success strategies in each market and segment. To find out more about neurological device market data, register online or email us at info@idataresearch.net for a U.S. Market Report Suite for Neuromodulation, Neurovascular, Neurosurgical and Monitoring Devices brochure and synopsis.