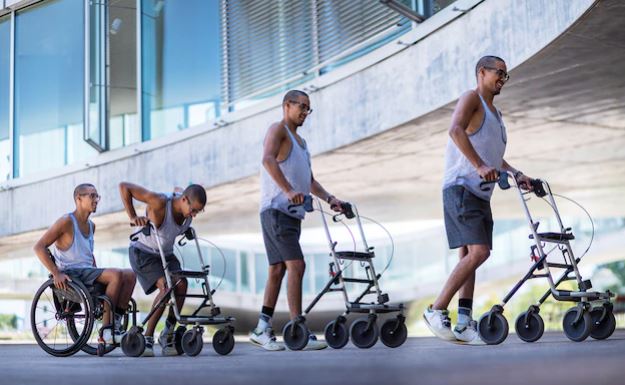 A world first: using a nerve-stimulating device implanted into the spinal cord and controlled by a tablet, Swiss researchers have enabled three paraplegic patients to stand and walk again.

Since 2018, technological innovation has proven that paralysis from spinal cord injury may be partly reversible, as using electrical implants on the spine seem to encourage the brain to grow new connections. The epidural electrical stimulation (EES) device targets the dorsal roots of the lumbosacral segment to restore walking for people with spinal cord injury. Three people who were paralyzed from the waist down due to spinal cord injuries had the device implanted into the spine to electrically stimulate the nerves in their back and legs, allowing for the ability to walk after injury.

Discussed in the findings of Nature Medicine, research found that this electrode system seems to work faster than previous attempts of spinal cord electrical stimulation. Improvement was said to be seen within a single day of treatment and continued in the months to follow.

“On the first day, I was able to see my legs moving and it was very, very emotional,” says Michael Rocatti, who after three months of training could walk outside using a wheeled walking frame.

The researchers developing this innovation took a surgically implanted device, aptly named a spinal cord stimulator, and modified the technology. Rather than targeting pain receptors, the device utilizes electrodes that send personalized signals to the spinal nerves responsible for controlling leg and trunk movements. These signals reach the spine through the sides of the body, allowing for specific targeting and activation of spinal cord regions.

Three trial patients, men between the ages of 29 and 41 injured in motorcycle accidents were able to use the device on themselves through the use of a touchscreen tablet, and within six months regained the ability to walk, swim, and cycle.

Onward Medical is aiming to commercialize the system in the coming years. The company expects to launch a trial involving 70 to 100 patients, primarily in the United States.

If the study’s early results can be confirmed with a larger population pool, people immobilized by spinal cord injuries may one day be able to open a smartphone or talk to a smartwatch, select an activity such as “walk” or “sit”, then send a message to the implanted device to stimulate the nerves and muscles to make the movements happen.

For more information on the Global or Country-level Spinal Implants Market, click the link below to download a free executive summary.