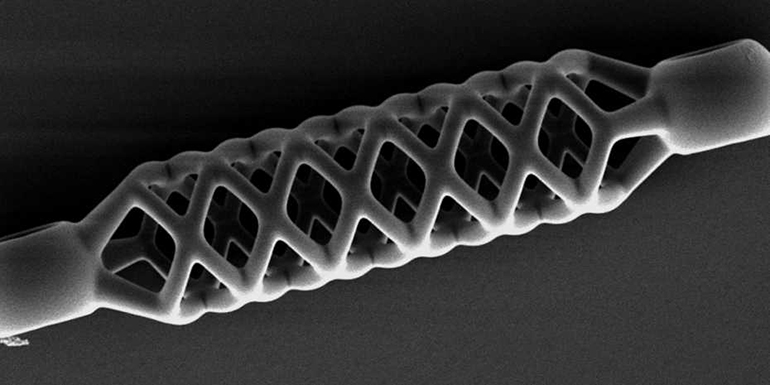 Scientists at ETH Zurich, a major Swiss science and technology university, have managed to 3D print a malleable stent small enough to be implanted into the urethrae of fetuses.

According to the researchers, the device has features 40 times smaller than those in any previously developed stents. It has shape memory, so can be squeezed inside a narrow delivery device and once positioned it pops back out to its original configuration.

The breakthrough development is the ability to 3D print small structures, which can be used in a variety of medical applications, using an entirely new method. Devices narrower than 100 micrometers in diameter can be readily created. The next steps for this technology will involve testing the devices in animal models before proceeding to evaluate the new implants in humans.

“We’ve printed the world’s smallest stent with features that are 40 times smaller than any produced to date,” says Carmela De Marco, lead author of the study and Marie Skłodowska-Curie fellow in Bradley Nelson’s research group. The group calls the method they’ve developed indirect 4D printing. They use heat from a laser beam to cut a three-dimensional template – a 3D negative – into a micromould layer that can be dissolved with a solvent. Next, they fill the negative with a shape-memory polymer and set the structure using UV light. In the final step, they dissolve the template in a solvent bath and the three-dimensional stent is finished.

According to iData Research, one of the most recent innovations in the urological device market was the inception of the single-use flexible ureteroscope market, with the launch of Boston Scientific’s LithoVue™ in 2016. Due to the single-use nature of the device, the costly process of reprocessing and sterilization is eliminated. If single-use devices are developed for other urological endoscopes, unit sales could potentially grow exponentially.

These stents are still a long way from finding real-world application. Before human studies can be conducted to show whether they are suitable for helping children with congenital urinary tract defects, the stents must first be tested in animal models. However the initial findings are promising, “We firmly believe that our results can open the door to the development of new tools for minimally invasive surgery,” De Marco says.

More on the urological device market in  the U.S. can be found in a series of reports published by iData Research entitled the U.S. Market Report Suite for Urological Devices

Urinary Incontinence Statistics 2019: Over 285,000 Procedures Performed Annually in the U.S.