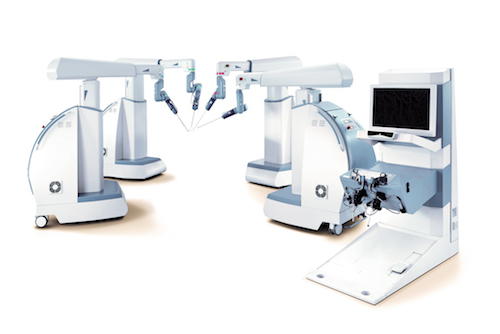 Robotic surgery statistics released by iData Research demonstrates that over 693,000 robotic assisted procedures were performed in 2017 in the United States.

The market is currently dominated by Intuitive Surgical, but has seen strong growth on the part of smaller companies, such as Corindus and Mazor Robotics. In addition to the release of several new systems, the market has also seen robotics company acquisitions by larger, more established implant firms, with whom previous partnerships existed.

Intuitive Surgical’s market lead can be attributed to their strong showing in the MIS market, the largest segment in the total robotic-assisted surgery system market. iData’s robotic surgery statistics show that in 2017, minimally invasive surgeries accounted for approximately 86% of total robotic surgeries performed in the United States. As more physicians are trained in these techniques, and the technology becomes more widely available, this number will increase.

Intuitive Surgical received FDA approval for the da Vinci® Surgical System in 2000. Since then, the company has amassed an installed base of over 2,900 systems in the U.S. and over 4,500, globally. The system incorporates a three-dimensional stereoscopic monitor with three robotic arms and seven degrees of movement freedom that allows for the operators’ motions to be exactly replicated. With the aid of the da Vinci® system, surgeries can be performed in real time by tiny electromechanical arms and instruments inserted in the patient’s body through small, minimally invasive ports.

In 2017, Stryker captured the second-leading position in the robotic-assisted surgery system market. The company’s strong position was attributed to robust sales of its Mako™ robotic arm. Stryker acquired MAKO Surgical Corporation in 2013, with plans to market the system along with their own implants. Prior to the acquisition, MAKO manufactured and sold the Rio® Robotic Arm Interactive Orthopedic surgical platform, marketed under the name “the Mako robotic arm”. The Mako™ system has applications for partial knee arthroplasty (PKA), total hip arthroplasty (THA) and total knee arthroplasty (TKA).

Robotics technologies are in the early stages of development across many different procedures and markets. Even MIS, the most established market, is only now beginning to see established firms moving in to compete. This means that as surgical robotics technologies develop and become more accessible to surgeons, the market will see growth in both procedure applications and associated revenue. In addition, the entrance of established companies such as Stryker, Zimmer Biomet, Johnson & Johnson, and even Google, into the surgical robotics space will allow for dramatically greater investment and research prospects.

More research on the robotics system statistics and market data can be found in the full report suite, titled U.S. Market Report Suite for Robotics and Surgical Navigation Systems, which provides a comprehensive analysis on units sold, market values, average selling prices, procedure volumes and  forecasts, as well as detailed competitive market shares and analysis of all major competitors.