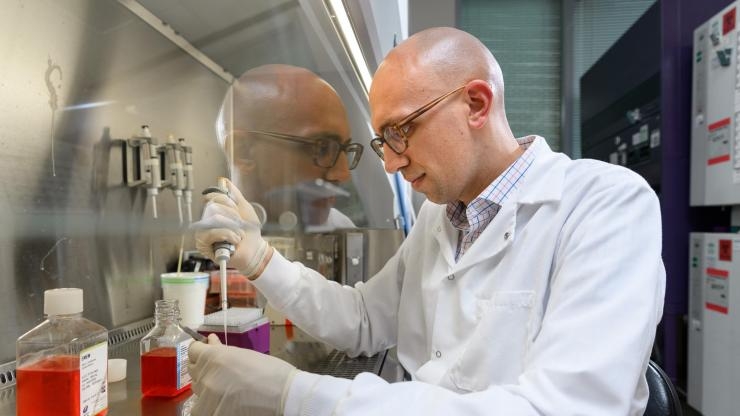 Bone infections are notoriously tricky to treat, and antibiotics are frequently prescribed. Now, researchers at Georgia Tech have created a hydrogel material that can be used to treat bone infections and even prevent them from happening following surgery.

The injectable hydrogel is a network of cross-linked polymer chains, and contains the enzyme lysostaphin and the bone-regenerating protein BMP-2. In a new study using a small animal model, the research team showed significant reduction in an infection caused by Staphylococcus aureus, along with regeneration within large bone defects.

“Treatment for bone infections now often requires two surgeries to both eliminate the infection and heal the injured bone,” said Andrés J. García, executive director of the Parker H. Petit Institute for Bioengineering & Bioscience at the Georgia Institute of Technology. “Our idea was to develop a bifunctional material that does both things in a single step. That would be better for the patient, cost less and reduce hospitalization time. We have shown that we can engineer the hydrogel to control the delivery and release of both the antimicrobial enzyme and the regenerative protein.”

This hydrogel-based therapy could be used to treat established bone infections, and as a prophylactic during surgery to prevent infection.

“With this strategy, we can get rid of the bacteria in such a way that the body re-establishes a normal inflammatory environment that allows the bone to heal,” García said. “Use of lysostaphin has been limited by poor stability inside the body, but in the gel, it can maintain stability for at least two weeks. That allows for controlled release over a longer period of time, which is sufficient for what we are trying to do.”

According to a recent Orthopedic Biomaterials Report published by iData Research, the total market for bone graft substitutes, which includes allografts, demineralized bone matricies and synthetic grafts, have a market value of over $1 billion in the U.S. alone. The synthetic bone grafts accounted for the largest portion of the market followed by the DBM grafts. Market growth has been supported by the strong adoption of the BMP growth factor, which is represented by Medtronic’s INFUSE® product.  The recent resurgence of growth in the more inexpensive allograft material market has driven DBM prices lower in order to stay competitive. Medtronic’s Grafton™ DBM is expected to continue expanding this market.

The hydrogel material has been used in the human body before, and is designed to quickly leave the treatment site. “The hydrogel breaks down into small building blocks that are excreted in the urine,” Garcia said. “After several weeks, there is no synthetic material left in the body and it is replaced by normal healing tissue.”

Orthopedic Biomaterial Devices: Top Brands per Segment in the U.S.