This market benefited substantially from growth in laparoscopic procedures, especially the significant growth in bariatric procedures over the last few years. Disposable instruments are preferred over reusable instruments within the United States, but reposable devices, which have a reusable component and a disposable component, are becoming more popular. Ongoing research continues to drive technological advancements, and newer, multifunctional devices that can play a variety of roles during laparoscopic surgery continue to be favored.

Large amounts of resources have been allocated to researching and developing more advanced tools to refine the process of conducting laparoscopic procedures. Newer, state-of-the-art multifunctional devices are the future of laparoscopy. Their high costs will further drive growth in this market. 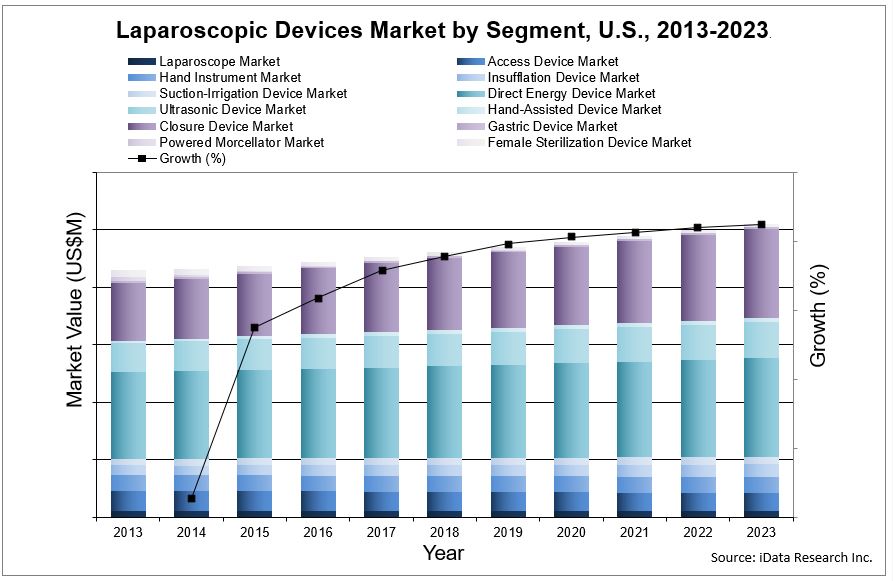 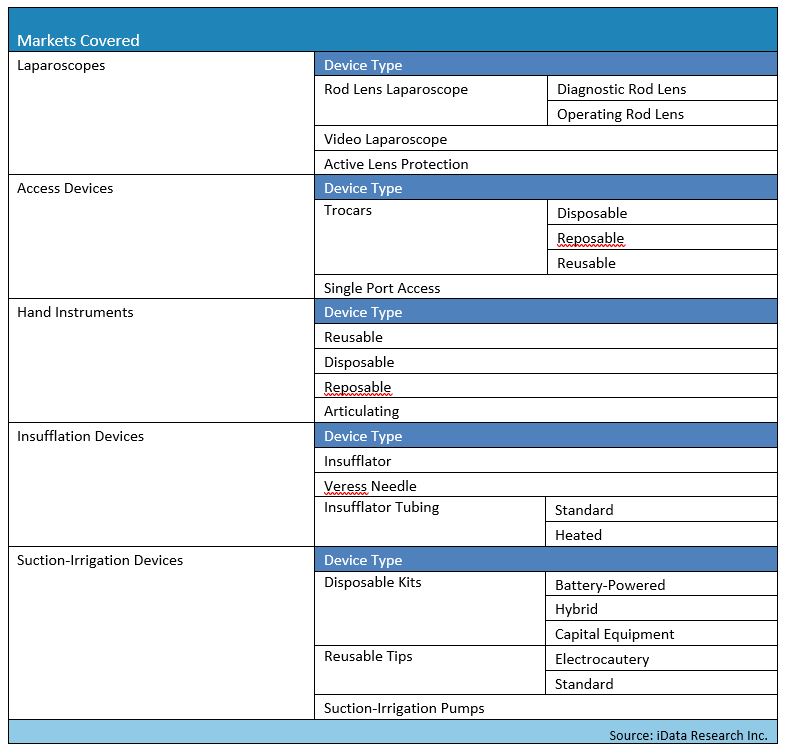 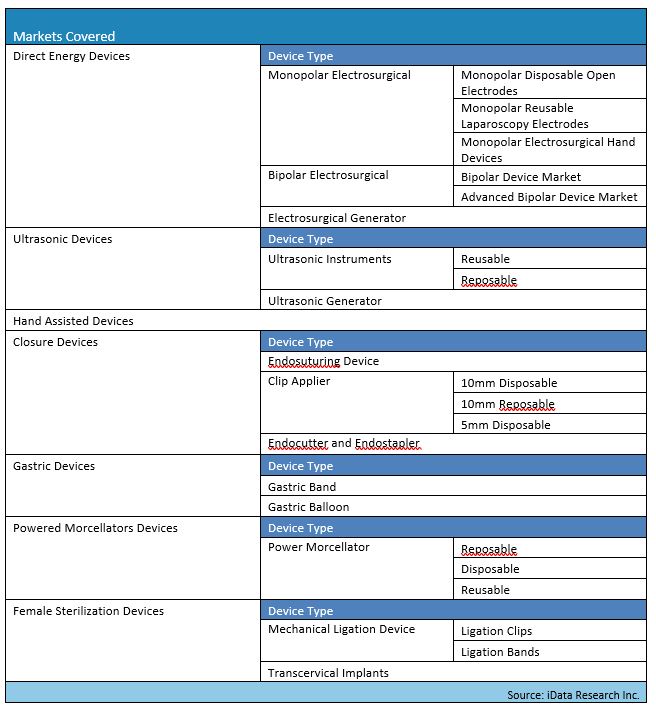 Of the many companies in the laparoscopic device market, Medtronic is the leading competitor, with Ethicon behind in second place for both the U.S. and Europe. Together, the two companies account for over half of the total market share. Medtronic’s lead can be attributed to the largely successful sales of their LigaSure™ devices which allowed the company to gain a commanding position in the direct energy device segment.

Olympus and Applied Medical secured the third and fourth highest market shares in the U.S. Stryker held the fifth highest share, aided by the uptake in video laparoscopy procedures. Their products also provide a high cross-selling potential, with the majority of Stryker’s diagnostic laparoscopy sales also securing sales of their Olar Video towers.

Karl Storz has a strong presence in the European market due to their high quality reusable products and devices. The one exception would be the access device market where disposables are more commonly used than reusables.

In this report suite we’ve analyzed several other companies, which include market shares from Olympus, Applied Medical, Stryker, ConMed, Ethicon, Richard Wolf, Bayer, B. Braun Aesculap, and Others.

There are currently over 3.1 million total laparoscopic procedures performed in the United States annually. The number of laparoscopic procedures performed has been growing steadily contributed to be the growth in laparoscopic sleeve gastrectomy procedures.Since its inception, minimally invasive surgery has become increasingly advanced as more sophisticated technology continues to be developed in order to maximize the clinical benefits of this approach. Laparoscopy is the most popular form of minimally invasive surgery. This technique continues to gain traction as an increasing number of surgeons continue to recommend this approach based on its notable clinical benefits. Many procedures that have been traditionally performed using an open approach are now often performed using laparoscopy.

In Europe, there are currently over 1.67 million laparoscopic procedures performed annually. The number of laparoscopic procedures has been growing steadily over the last few years, spurred on by strong growth in the market for bariatric surgeries. Germany, France, and Benelux were the largest supporters of laparoscopic surgery in Europe. The Benelux region has become a well-known center for bariatric surgery, attracting thousands of foreign patients. Procedure rates in the U.K. were relatively low for a country of over 60 million people. Low procedure rates in the U.K. are due to multiple factors, but mainly, cost concerns and an older surgeon population that has not been trained in laparoscopy. Despite having one of the most obese populations in Europe, the U.K. performs less obesity interventions than Belgium, a country with approximately 20% of the overall
population of the United Kingdom.

See many more by requesting a free sample report of this analysis.

For a Full Table of Contents From Any of the Country Reports in this Global Series, please Contact iData
One of the the most accurate methods of market research in the medical device industry is to analyze the procedure volumes and trends. Through this study on laparoscopic devices, iData Research has performed an analysis on the following procedure segments in order to increase the accuracy of our market sizing, and provide you with the volume of procedures over a 10 year range. While the below market segmentation map is representative of the United States, procedure volume data is also provided for the other regions within this complete series. 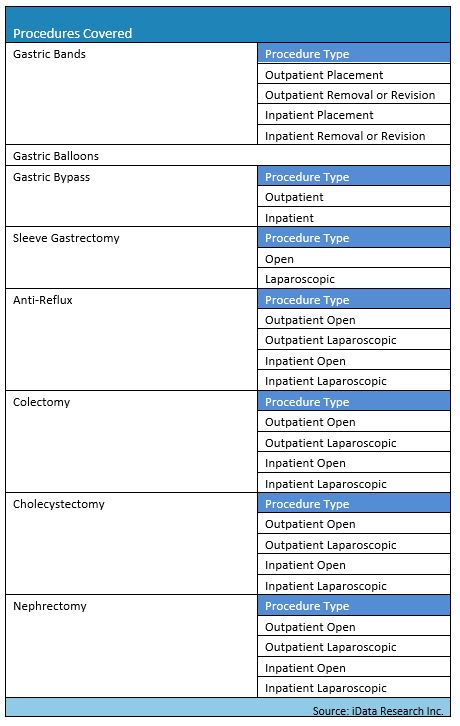 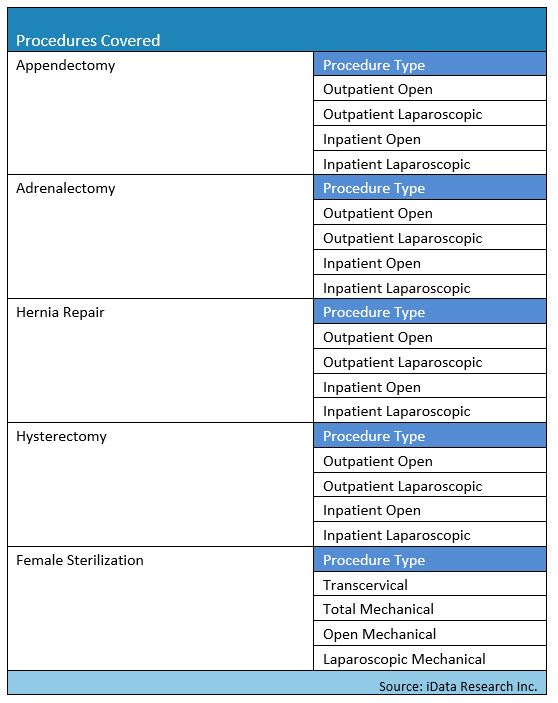