When good technology is hindered by a lack of reimbursement, and the reimbursement system doesn’t seem to be changing fast enough, you have to find other solutions. That’s exactly what the manufacturers of negative pressure wound therapy (NPWT) devices have had to do in Europe.

Negative pressure wound therapy is used for promoting the healing of large or chronic wounds, fighting infection, enhancing the healing of burns and for the eventual, successful closing of the wound. In the past, NPWT pumps were large and bulky, limiting a patient’s mobility and requiring them to stay in the hospital. Recently, companies have been releasing portable and single-use pumps, such as Acelity’s SnapTM therapy system and Smith & Nephew’s PicoTM single-use pump, expanding the use of NPWT beyond the hospital and driving the overall market. According to iData Research, the adoption of these devices is expected to continue to drive the number of units sold in both the U.S. and Europe.

Due to the lack of reimbursement, there has been slow adoption of NPWT in some European countries. To penetrate markets where reimbursement is limited, the free rental model has been put into place. This is a major shift in the business model, where NPWT pumps are rented to hospitals or homecare settings free of charge, and the disposables, such as dressings and canisters, are the company’s main source of revenue. This has become implemented in many southern European countries and is becoming more common in the U.K. and the Scandinavia region. The use of this business model has had a positive effect on the overall adoption of NPWT in Europe but poses significant repercussions.

Although NPWT is becoming more common in European countries, the free rental model limits the pump market, as the cost of NPWT pumps is decreasing significantly. According to iData Research, the average selling price (ASP) of conventional NPWT pumps decreased by almost 10% in 2018. Although the number of pumps sold is increasing, units placed free of charge via the free rental model have eroded the ASP of the total NPWT pump market.

Price declines, due to competition and the implementation of the free rental model, have allowed NPWT to penetrate countries such as Italy and Spain, where the market was previously almost non-existent. In this case, the increase in disposable products sold as NPWT becomes more common has been able to offset price declines, creating a relatively flat NPWT market, with only slight increases year over year.

As the free rental model becomes more common across Europe, the NPWT market is expected to remain on this trajectory, growing at a CAGR of 1.2%. NPWT is penetrating the market and cannibalizing other types of wound management devices, such as advanced wound dressings and wound closure devices, due to the broad indications for NPWT. 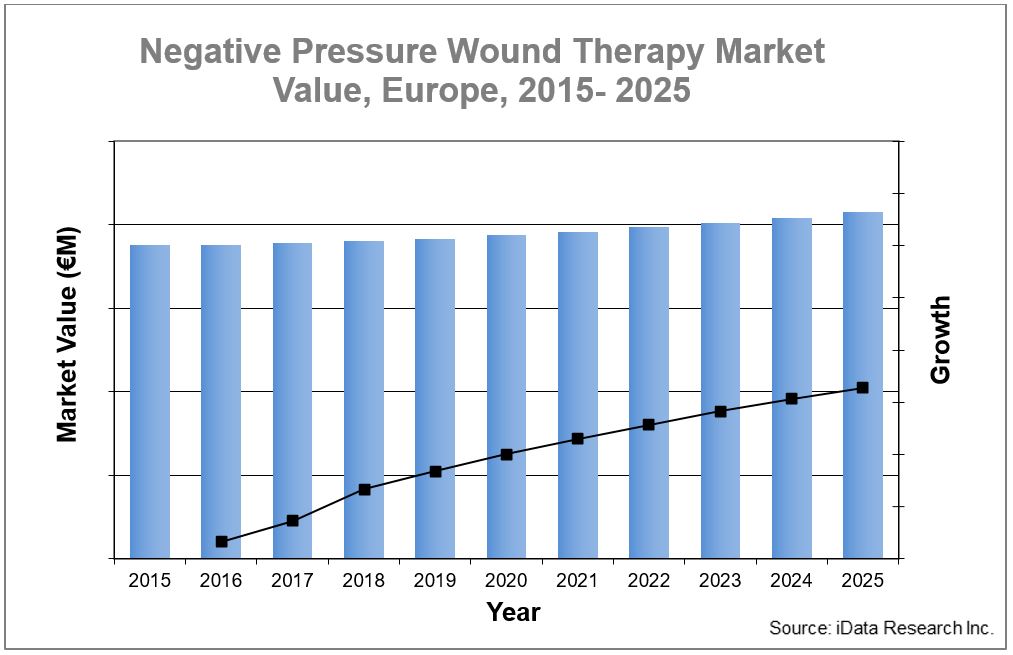 In comparison to Europe, NPWT was able to penetrate the U.S market without implementation of the free rental model. Therefore, drastic price declines are not witnessed in the U.S and the market is growing significantly.

Acelity and Smith & Nephew make up almost 80% of the European NPWT market, while in the U.S, Acelity alone makes up the vast majority of the market. Both companies are attempting to gain market share through the release of new products that expand the indications of NPWT. Acelity has had success in the U.S market without the need to implement the free rental model, but, in Europe, companies had no choice but to adopt the free rental model, as it was a technique used in order to penetrate certain markets. With the recent release of new NPWT products that expand the indication to aid in the closing of incisions, this market is not expected to slow down in the near future despite the steady erosion of prices.

Sean Collins is an Analyst Manager at iData Research. He has served as the principal analyst for dozens of medical device research projects, syndicated and consulting, and now leads others in doing the same.

Mikayla Schaffner is a Research Analyst at iData Research and was a lead analyst on the United States Wound and Tissue Management Market Report Suite 2019 – MedSuite. In addition to studying the U.S., her work expands out into Europe and Asia.