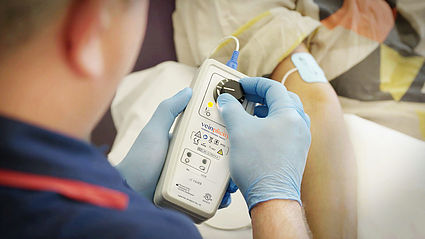 Physeon has recently announced positive clinical trial results from their second clinical trial with Veinplicity®. The results demonstrate that cannulation success rates were significantly higher with the device when used before tourniquet in patients that were at moderate risk of failed cannulation. A scoring system called the A-DIVA scale has been developed and used to infer the risk of failed cannulation for pre-operative patients, and was used to gauge patient status in this scenario.

Rick van Loon, clinical epidemiologist and nurse anesthetist at Catharina Hospital and the lead investigator for the trial, stated that “Patients at low risk don’t need special intervention, and patients at high risk may need escalation to specialist staff or more invasive procedures, so we wanted to focus on patients in the middle, with medium risk of failed cannulation, to see if we could increase our first attempt success with Veinplicity.”

The trial’s results showed that first attempt cannulation success rates grew from an initial 78% to 92%, indicating that the Veinplicity device is suitable for patients in the medium-risk bracket. Failed cannulation is a prominent issue because it can result in unnecessary and extraneous pain for patients and procedural problems in the pre-operative scenario. In conjunction, not only do these issues cause patient discomfort, but they can also cause lengthy delays.

An estimate of up to 80% of hospitalized patients require a peripheral IV cannula for fluid and/or medication infusion, and as such, failures are commonplace and can cause excess stress for patients and professionals. Despite the fact that it is the most commonly performed invasive procedure in hospitals, the first attempt failure rate is high, presenting an ongoing problem.

Veinplicity addresses these stressors by seeking to alleviate difficult venous access. It significantly increases the size, rigidity and stability of forearm veins, rendering them easier to detect and cannulate on the first attempt. Veinplicity accomplishes this by creating electronic stimulation to pass a gentle current through electrodes on the patient’s palm and bicep. The device is portable and is the only technology which has a physiological effect on veins.

More on the peripheral vascular market in the U.S. can be found in a report series published by iData Research entitled the U.S. Market Report Suite for Peripheral Vascular Devices and Accessories.