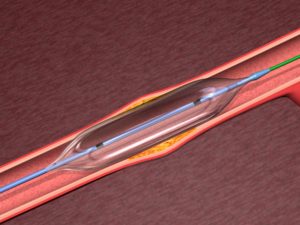 Over the past few years, the peripheral vascular device market has seen substantial growth. Driven by forward-pressing research, increased awareness about treatment options, and an aging population in the United States, the total number of procedures performed and, therefore, the total number of devices used, has seen a strong and steady increase. One main disease that leads one towards seeking treatment is peripheral arterial disease (PAD). PAD restricts blood flow to different locations and different extents, typically affecting the lower limbs along with the renal and carotid arteries. Although PAD is not considered a life-threatening condition, the disease can increase the risk of stroke or heart attack.

Treatment of PAD with Drug-Coated Balloons

Drug-coated balloons (DCB) have emerged as a promising technology for treating PAD. DCB’s are similar to traditional balloon dilation catheters but feature a drug coating designed to combat restenosis. As of January 2020, DCBs are approved in the United States for use in treating lesions of the superficial femoral artery (SFA) and in AV access procedures. The drug-coated balloon (DCB) market experienced the largest shock due to the FDA’s questioning of late mortality in paclitaxel use. In January 2019, the FDA released a statement questioning the late mortality of paclitaxel-coated devices for use in peripheral treatments. This raised concerns about the use of drug-coated balloons (DCBs) and drug-eluting stents (DESs), enticing a temporary suspension on their use in some hospitals and clinics across the country, promoting a massive shift towards more traditional treatment techniques. This shift resulted in almost a 40% drop in market value. However, in August 2019, the FDA released a final statement that they would continue to allow the use of paclitaxel devices in PAD treatment, but requested additional research by manufacturers on late mortality. Therefore, the device is expected to regain popularity and confidence about its use as additional clinical evidence is released. The DCB market is expected to increase its share of the total peripheral vascular device market considerably in the coming years.

Many companies are in the process of bringing a DCB to market, such as Boston Scientific. Boston Scientific’s Ranger™ Drug-Coated Balloon received CE Marking in July 2014. As of January 2020, Ranger™ is not available for sale in the United l device exemption (IDE) trial is underway after enrollment was paused in January 2019.

QT Vascular began enrolling patients in its U.S. pivotal study of its Chocolate Touch® Drug-Coated Balloon in July 2017. Atherectomy was recently included in the study of this device following approval from the FDA in February 2019. Overall, the U.S. Drug-Coated Balloon Market was valued at $227 million in 2020. This is expected to increase at a rate of almost 8% to reach $340 million by 2026.