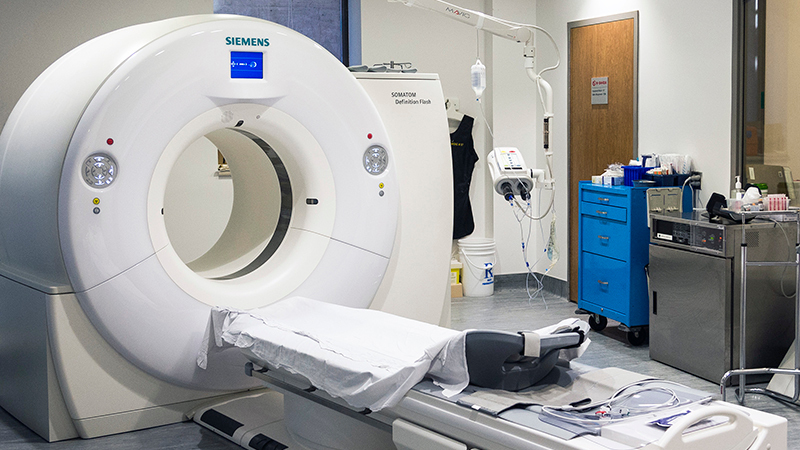 According to the latest results from iData Research’s medical imaging procedures analysis, over 75 million CT scans are performed each year in the United States. This number is forecasted to grow to reach 84 million procedures by 2022, despite the significant concerns about radiation exposure.

The majority of CT scan procedures performed are for diagnostic purposes, particularly for the head, neck and facial regions. In recent years, there has been a surge in popularity for CT scanner usage in cardiac procedures, most notably cardiac CT angiography. These scans require premium systems with higher image resolutions. Higher-resolution systems, as expected, are more expensive, and as demand for these types of systems increases, the total market value for the CT imaging market will be driven upward.

In 2017, the U.S. market for CT imaging devices was valued at $820 million. This market includes 16/20 slice, 32/40 slice, 64-slice and ultra-premium scanners. The overall CT market has been decreasing since the implementation of the deficit reduction act (DRA) in 2005, and further with the recent introduction of the NEMA XR-29 standard, which reduced reimbursement for many types of CT scans.

Another major factor that continues to limit market growth is the patient concern associated with the exposure to radiation during a CT scan. This widely publicized issue may be cause for physicians to limit the number of scans performed and, consequently, limit the demand for new systems. Sales of higher-end systems, such as the 64 slice and ultra-premium models, are more limited by this issue, as they produce relatively more radiation than the other models.

However, recent technological advancements have allowed newer systems to use less radiation, which will encourage the sales of new equipment. Particularly with the NEMA XR-29 standard, which regulates reimbursement based on radiation dosage, there is greater incentive to replace older scanners that emit radiation in higher doses.

Currently, the largest segment of the CT scanner market is the ultra-premium market, followed closely by the 64-slice market. In fact, the 64-slice market is expected to overtake the market for ultra-premium systems to become the predominant market segment, due to their growing recognition as the industry standard. In addition, while ultra-premium scanners are able to provide the highest level of resolution, their high cost is discouraging to most hospitals and private imaging centers. 64-slice scanners will be the only segment in the overall market to exhibit growth over the forecast period.