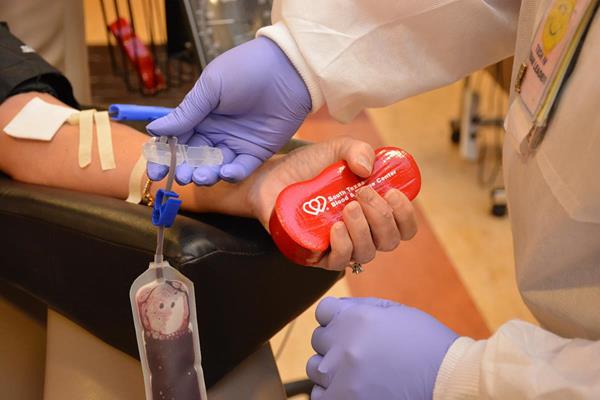 San Antonio is one of the first cities to implement the system, which is based on a battlefield transfusion program developed by the U.S. military and later adapted at the Mayo Clinic trauma center. The 75th Ranger Regiment “O Low-Titer Whole Blood Program” was the recipient of the Army’s Greatest Innovation Award in 2017

Research led by Dr. Donald Jenkins, a former U.S. Air Force officer and the principal architect of the Joint Trauma Theater Trauma System in Iraq and Afghanistan, showed that combining the practice of pre-hospital transfusions with specially tested units of whole blood – rather than transfusing individual blood components of red cells, plasma or platelets – is most effective in treating trauma victim suffering from significant blood loss.

Dr. Jenkins later began to transfer the program to civilian use as trauma medical director at the Mayo Clinic. He is now a surgical critical care specialist affiliated with University Hospital in San Antonio, and the Betty and Bob Kelso Distinguished Chair in Burn and Trauma Surgery at UT Health San Antonio.

“Implementing this program for civilian use will truly transform how emergency care can be administered on medical helicopters and significantly improve survival rates for trauma victims.” said Elizabeth Waltman, COO of the South Texas Blood & Tissue Center. “This is also the first step towards a longer-term solution for saving more lives in mass-casualty situations, especially if we are able to expand the program in the future to include emergency care provided by ambulance services.”

The program was established in San Antonio with support from a grant provided by the San Antonio Medical Foundation.

Blood for the Brothers in Arms program will come from the South Texas Blood & Tissue Center, donated by specially tested male O-positive donors.

The universal blood type generally used for emergency transfusions, O-negative, is found in just 7 percent of the population. More than 30 percent of donors are type O-positive, making it the most common blood type. South Texas Blood & Tissue Center’s sister blood-testing organization, QualTex Laboratories, worked with the military to develop the testing protocol to identify O-positive donors with low antibody levels, making it possible to use O-positive blood for these trauma victims. The program is targeting male O-positive donors because men tend to have lower levels of certain types of antibodies in their blood than women, reducing the possibility of adverse reactions in patients.

STBTC is working to sign up a committed pool of male O-positive donors for the Brothers in Arms program to ensure a regular supply of specially tested whole blood for medical helicopters. The goal is to eventually expand the program to provide whole blood to area emergency vehicles.

More on the infusion therapy device market in the U.S. can be found in a series of reports published by iData entitled the U.S. Market Report Suite for Infusion Therapy Devices. The full report suite on the U.S. market for infusion therapy includes infusion pumps, intravenous (IV) sets, needleless connectors (NLCs) and stopcocks.

The iData series on the market for infusion therapy devices covers the U.S. and 15 countries in Europe including Germany, France, the United Kingdom (U.K.), Italy, Spain, Benelux (Belgium, Netherlands and Luxembourg), Scandinavia (Finland, Denmark, Sweden and Norway), Portugal, Austria and Switzerland. Reports provide a comprehensive analysis including units sold, procedure numbers, market value, forecasts, as well as detailed competitive market shares and analysis of major players’ success strategies in each market and segment. To find out more about infusion therapy device market data, register online or email us at info@idataresearch.net for a U.S. Market Report Suite for Infusion Therapy Devices brochure and synopsis.