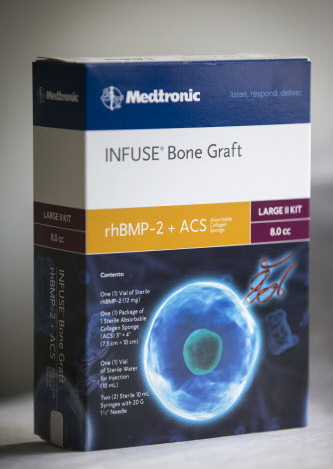 Medtronic is sponsoring a series of new clinical tests of its controversial genetically engineered bone-growth product Infuse in an effort to gather long-term data about the optimal dose of the chemical in fusing spine bones to treat lower back pain.

Back pain is one the most common reasons Americans visit the doctor, and Infuse has been used widely to fuse bones that are painful when they move. But since the product was first approved in 2002 by the Food and Drug Administration, spine surgeons have mainly used Infuse in surgical applications that were not considered for safety by the FDA, including surgeries from a rear or “posterior” surgical approach, according to peer-reviewed studies.

Now Medtronic wants to gather data on two of the unapproved procedures: PLF, or posterolateral fusion of lower-back vertebrae using fixation hardware that attaches to the back of the bones; and TLIF, or transforaminal lumbar interbody fusion, in which a device is placed between the vertebrae being fused. Both experimental surgeries will use the chemical component of Infuse, a highly concentrated version of the naturally occurring human protein that causes bone growth.

Medtronic officials said Tuesday that the first of a planned 125 patients has been enrolled in the Infuse dosing study for PLF, which will be followed by the dosing study next year for TLIF.

Read more at the Star Tribune