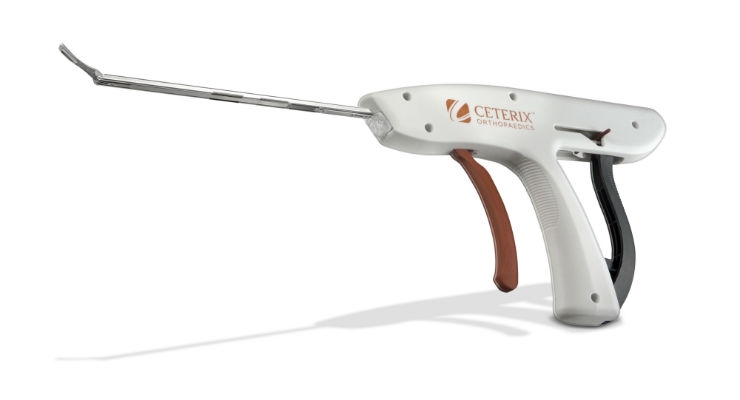 Ceterix® Orthopaedics, Inc., a leader in the development of cutting-edge surgical tools for orthopaedic surgeons, announced U.S. Food and Drug Administration (FDA) clearance of the company’s NovoStitch® Pro Meniscal Repair System. This next-generation meniscal repair system is a significant product evolution, offering enhanced technical features to improve the ease of use and workflow for the surgeon.

“The new NovoStitch Pro meniscal repair system represents a significant improvement to one of the most innovative technologies developed for arthroscopic knee repair,” said Dr. Peter Kurzweil, president of Memorial Orthopaedic Surgical Group in Long Beach, Calif. “The technological enhancements incorporated into the new system offer the potential to repair tear types that were previously considered difficult or impossible to sew, with improved control and access for the surgeon. I look forward to incorporating it into my practice.”

The meniscus is a crescent of soft cartilage resting between the femur and tibia that cushions the knee and provides stability to the joint. Meniscal tears are one of the most frequently occurring knee injuries and are most often treated by a procedure called a meniscectomy, in which a surgeon removes the torn tissue. Meniscectomy has been shown to increase a patient’s risk of developing osteoarthritis, which may lead to total knee replacement later in life. A 2015 health economics study determined that effective meniscal repair can result in long-term cost savings vs. meniscectomy due to the reduced risk of requiring costly future interventions.

“This FDA clearance is another important milestone in our mission to reduce the number of meniscectomies and to save the meniscus,” said John McCutcheon, Ceterix’s president and CEO. “Ceterix continues to be the leader in meniscal repair by providing innovations that preserve tissue and sustain the natural biomechanics of the knee joint.”

Arthroscopic surgery is a minimally-invasive procedure in which an orthopaedic surgeon treats a damaged joint through small incisions using specialized tools guided by a tiny camera called an arthroscope. Meniscus surgery is the most common arthroscopic procedure in the United States, with roughly one million performed annually.