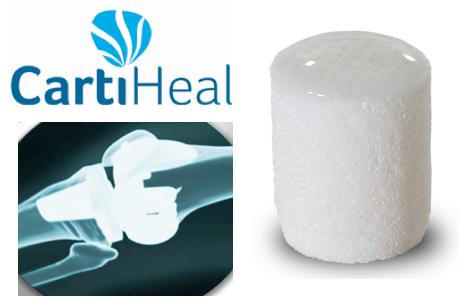 CartiHeal, developer of Agili-C™, a proprietary implant for the treatment of joint surface lesions, announced the publication of a study demonstrating that the Agili-C™ implant promotes the regenerative capacity of articular cartilage defects in human cadaveric ex-vivo model. The study, published in KSSTA Journal – Knee Surgery, Sports Traumatology, Arthroscopy (01 November 2018, PP 1-12), was conducted at Rush University in Chicago by Prof. Susan Chubinskaya.

The goal of the study was to investigate the ex-vivo Mechanism Of Action of the Agili-C™ implant in the repair of full-thickness cartilage defects. In particular, it was intended to validate whether the Agili-C™ implant has the potential to stimulate cartilage in-growth through chondrocyte migration into the 3D interconnected porous structure of the scaffold, along with maintaining their viability and phenotype and the deposition of hyaline cartilage matrix.

In the study, human articular cartilage cadaveric knee and ankle specimens were collected within 24 hours from death from 14 donors, male and female. To model a chondral defect, donut-shaped cartilage explants were prepared from each tissue specimen. Cartilage explants with or without the Agili-C™ implant inside were cultured for 60 days.

The results of the study confirmed the ability of chondrocytes to migrate outside of the cadaveric cartilage explant tissue and into the porous structure of the Agili-C™ scaffold and fill its entire volume with newly formed extracellular matrix (ECM) enriched in hyaline cartilage components, such as collagen type II and aggrecan, and lacking collagen type I.

In addition, the study demonstrated the formation of a layer populated by progenitor-like cells on the articular surface of the implant. These cells were able to produce a thin layer that covered the surface of the newly formed extracellular matrix, similar to a lamina.

In the absence of a scaffold, chondrocytes did not migrate far from the tissue with probably some degree of hypertrophy.

In conclusion, the analysis of samples taken from knee and ankle joints of human donors confirmed that the Agili-C™ implant induces  deposition of new extracellular matrix with similar characteristics to the native hyaline cartilage inside the entire volume of the scaffold.

CartiHeal, a privately-held medical device company with headquarters in Israel, develops proprietary implants for the treatment of cartilage and osteochondral defects in traumatic and osteoarthritic joints.

In the United States, the Agili-C™ implant is not available for sale – it is an investigational device limited for use in the IDE study.