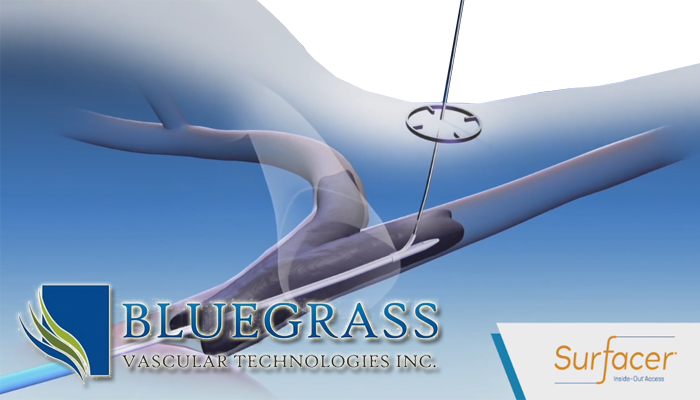 Bluegrass Vascular Technologies said it enrolled the first patients in a pivotal trial of its Surfacer “inside-out” vascular access catheter.

The Surfacer device is designed to provide access to the jugular vein to restore central venous access in hemodialysis patients with blocked neck veins; it won CE Mark approval in the European Union in August 2016; Bluegrass later inked an EU distribution deal with Merit Medical that included an equity stake.

Surfacer is designed to be threaded through the femoral vein up to and into blockages in the jugular, which acts as a stabilizer. The head of the catheter is then aligned via fluoroscopy with a target on the surface of the neck, and a needle guide is advanced through to the skin. A sheath is then inserted, the Surfacer retracted and a central venous catheter is attached to the sheath.

Today Bluegrass said it launched the Save-U.S. trial, a 30-patient investigational device exemption study to evaluate the device’s safety and effectiveness ahead of the bid for FDA clearance.

“It is exciting to be on the forefront of hemodialysis care and provide life-saving solutions that improve patient outcomes while reducing costs. We look forward to treating patients in the Save-U.S. pivotal trial and supporting our ongoing commercialization efforts in Europe,” president & CEO Gabriele Niederauer said in prepared remarks.

The first patients in the study were enrolled at St. Joseph Hospital in Orange, Calif., and Houston Methodist Hospital, the company said.

“Central venous obstruction is a serious disease that often causes a domino effect of vascular destruction, leaving hemodialysis patients and their physicians with limited options,” added St. Joseph’s Dr. Mahmood Razavi. “The Surfacer system has the potential to change the standard of care by offering a new strategy that allows reliable and repeated access to the right internal jugular vein, the optimal location for catheter placement.”

“Use of the Surfacer system helps preserve and restore venous territory for vascular access, supporting fistula and graft placement, and reduces catheter-related infections and costs,” Houston Methodist’s Dr. Eric Peden said in a press release. “I am excited to participate in the SAVE-US pivotal trial and help bring this clinically beneficial technology to patients in my practice and across the U.S.”

The iData series on the market for vascular access devices covers the U.S., Asia (China, Japan, South Korea), and 15 countries in Europe including Germany, France, the United Kingdom (U.K.), Italy, Spain, Benelux (Belgium, Netherlands and Luxemburg), Scandinavia (Finland, Denmark, Sweden and Norway), Portugal, Austria and Switzerland. Reports provide a comprehensive analysis including units sold, procedure numbers, market value, forecasts, as well as detailed competitive market shares and analysis of major players’ success strategies in each market and segment. To find out more about vascular access market data or procedure data, register online or email us at [email protected] for a US Market Report Suite for Vascular Access Devices and Accessories brochure and synopsis.