Rheumatoid arthritis (RA) is a chronic autoimmune disease that affect joints, connective tissue, muscles, tendons and fibrous tissue. Around 1.9 million people in the United States suffer from rheumatoid arthritis. RA has a large impact on the quality of life, both physically and mentally. Rheumatoid arthritis patients find difficulty in maintaining daily functions and a poorly maintained disease could cause joint destruction and disability. Many affected patients also tend to suffer from depression. The introduction of biologics has revolutionized the treatment and care for rheumatoid arthritis. Prior to RA biologics, the percentage of patients with poorly managed diseases was much larger. The conventional disease-modifying antirheumatic drugs (DMARDs) failed to effectively control the disease and brought negative effects of long-term corticosteroid usage. RA biologics demonstrate higher safety and efficacy in treating this condition, preventing joint destruction and causing remission. It also saves patient from the difficulties of going through expensive joint replacement surgery.

The first biologic, Enbrel®, was introduced in 1988 by Amgen. Although, the current market is crowded with biologics, many of these biologics are losing their exclusivity or are on the verge of patent expiration in the next five years, makes this field even more competitive. But one major drawback with biologics is the cost. The access to biologics is hindered by the expensive cost of the drug. In developing nations, where the public healthcare system is poorly funded, access to these biologics are almost unheard of. Even private insurance companies tend to offer limited coverage for these drugs.

Biosimilars are, as the name would suggest, highly similar and are a more affordable alternative to biologics that is poised to influence the current dynamics of the immunology market. However, they are not the same as the generic versions of chemical drugs, as the complex manufacturing process involved with biologics is not easy to replicate. Therefore, biosimilars go through many clinical trials to attain regulatory approval by the FDA. However, after they are approved as ‘interchangeable’ to the original biologic, they could also attain a year of exclusivity. Currently, many biosimilars in the production pipeline of large pharmaceutical companies are competing rigorously to obtain FDA approvals and reach the market first. The first biosimilars entering the market have much better opportunities to capture a significant share of the immunology market. Biosimilars have already started appearing in Europe whereas in the U.S., they are still emerging.

Remicade® was the first to experience the impact of a biosimilar entering the RA market. With the expiry of Remicade® patents in the U.S. and Europe, Pfizer’s Hospira and Celltrion product lines introduced their infliximab biosimilar Inflectra and Remsima, in the regions. There has been a decline in the volume of Remicade sales in the U.S. and Europe, with around 2.4% and 6% respectively in the first quarter of 2017, after the entry of Inflectra. A second infliximab biosimilar, Flixabi, has also been launched in Europe, raising the stakes in biosimilar competition. Inflectra is priced around 25% below that of Remicade® in Europe. Johnson & Johnson is cutting down its price to reduce the impact of the biosimilar threat.

Another biosimilar which has gained approval in the U.S., is Amgen’s Amjevita. This drug is poised to be a serious threat to AbbVie’s top revenue generating drug Humira, whose patent expired in 2016. However, AbbVie’s ancillary patents on Humira are strongly protected until 2023 in the United States. AbbVie, after a series of lawsuits with Amgen, has finally settled to allow its launch by Jan 31st, 2023 in the United States. The settlement has won some royalties for AbbVie from the biosimilar. However, Amgen will have a better foothold in the Europe RA biosimilars market with its product launch scheduled for October 16th, 2018. Other notable drugs projected to be released during the forecast period of 2017 to 2023 include Novartis’s Erelzi, a biosimilar to Amgen’s Enbrel. Although, Amgen has delayed the launch of Erelzi due to its pending lawsuits until 2018, it is sure to capture a significant market share after 2019.

The impact from the biosimilar competition is certain to affect the market shares of the current products on the market. Let’s have a look at the forecast for some of the leading drugs in the RA market for the next five years. The following forecast has factored in biosimilar competition, new molecule introduction, and the entry of newer janus kinase (JAK) inhibitors. 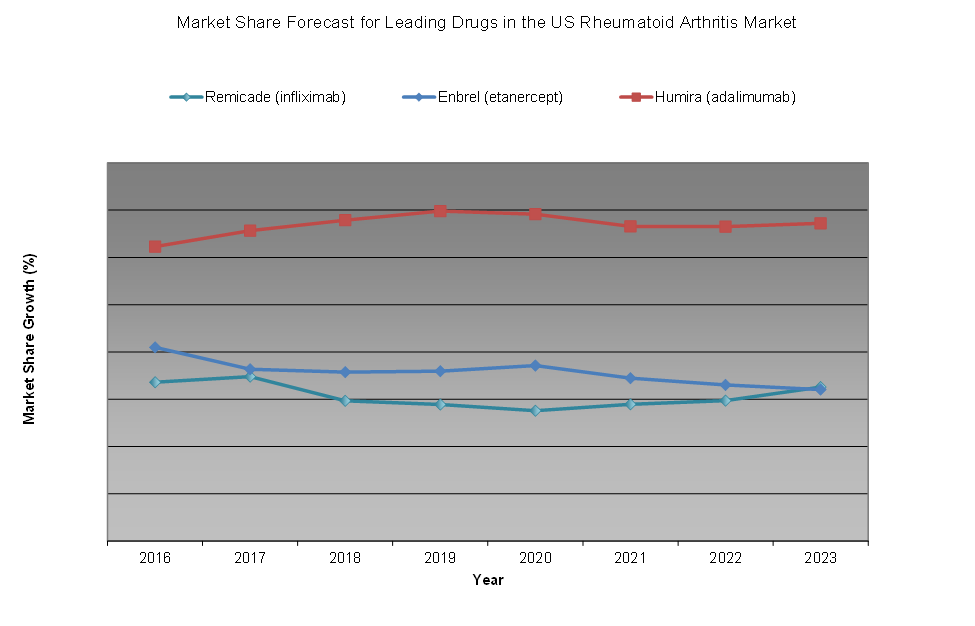 A similar competitive biosimilar-like threat could be seen in the other immunology sub-segments such as ankylosing spondilytis (AS), psoriasis (PsO), Crohn’s disease (CD) and ulcerative colitis (UC). To find out more about the immunology drugs market, register online or email us at [email protected] for information on our U.S. Market Report Suite for Immunology Drugs 2018 – MedSuite. 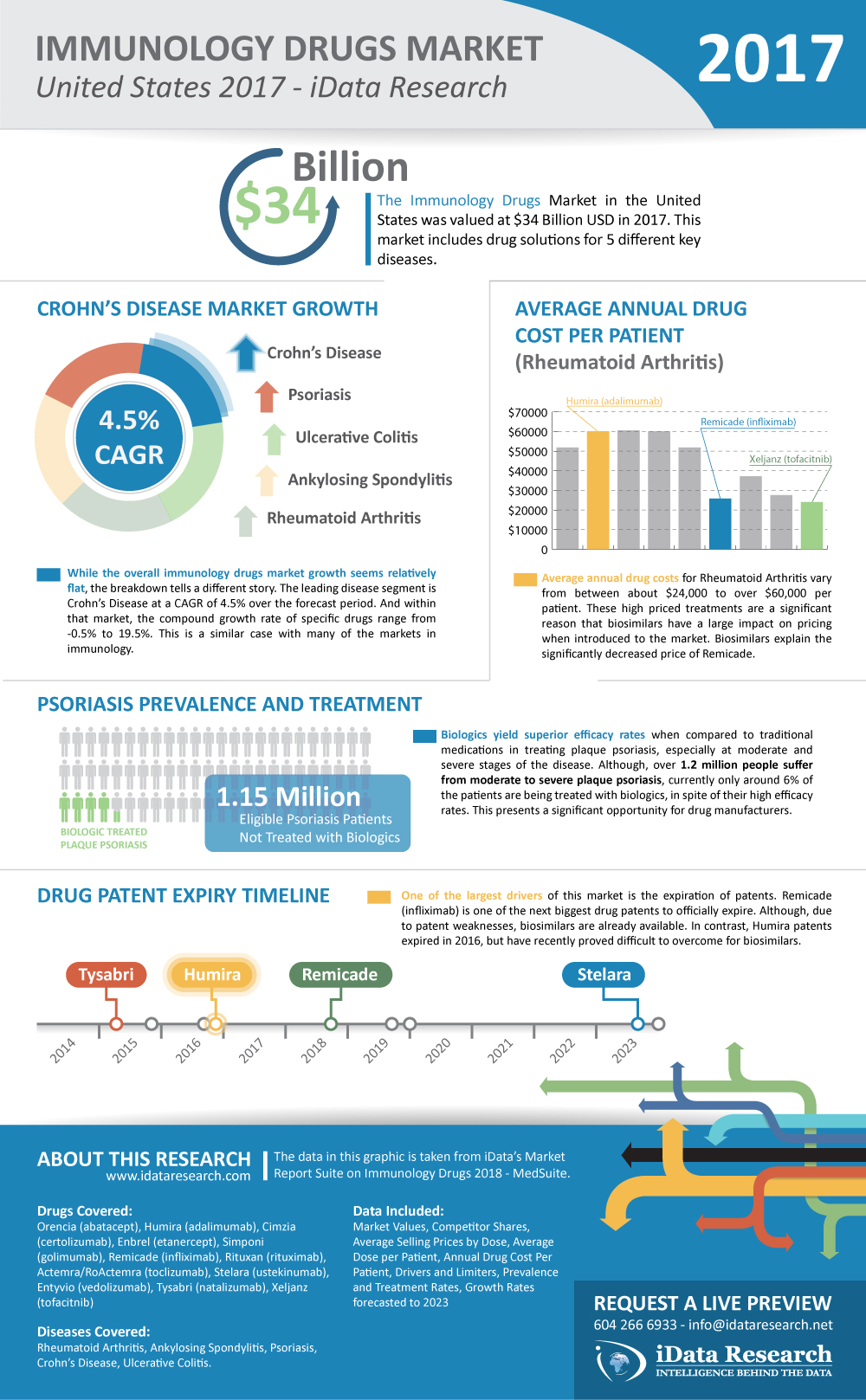 Annette Charles is a Research Analyst at iData Research and is serving as the lead analyst for the 2018 U.S. Market Report Suite for Immunology Drugs reports.

Kamran Zamanian, Ph.D., is president, CEO, and a founding partner of iData Research. He has spent over 20 years working in the market research industry.