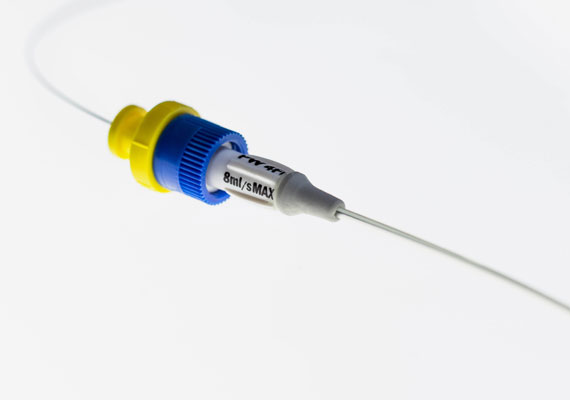 When central venous access for high-flow fluid resuscitation and drug administration is urgent, Access Scientific now has the answer — the POWERWAND™ CVC. Recently cleared by FDA for central venous access, this 16 gauge, single-lumen POWERWAND can be inserted, using the proprietary Accelerated Seldinger Technique (AST), in literally seconds — faster than an intraosseous device or standard CVC. And, once inserted, the POWERWAND CVC offers significantly faster flow rates than both competitive devices.

“Lives will be saved with this new POWERWAND CVC,” stated Steve Bierman, MD, the company’s Chief Medical Officer and a former Emergency Physician. “A skilled inserter can place this device in under 15 seconds and, thereafter, administer a liter of fluid in less than 6 minutes. With sepsis treatment protocols now requiring rapid administration of over 2 liters of fluid in the ED, the POWERWAND CVC could not have been introduced at a better time.”

The POWERWAND CVC, in addition to being high-flow and rapidly inserted, is also power-injectable at 8ml/sec. — allowing even the most challenging contrast CT studies to be completed using the device. When connected to a dual channel extension set, the POWERWAND CVC allows multiple agents (e.g., blood, fluid, medications) to be simultaneously infused without compromising flow rate or power-injectability. Traditional multi-lumen CVCs — which take far longer to insert — compromise both flow rates and power-injectability as a result of having multiple channels.

“This is a no-brainer,” commented one Emergency Physician at a prestigious military hospital in the mid-West. “There is now absolutely no need to take the time and risk starting a triple-lumen CVC in an emergency situation. We’ll just start this POWERWAND CVC and later, once things calm down, consider exchanging it for a multi-lumen CVC.”

POWERWAND CVC represents the second of three new POWERWANDs included in Access Scientific’s suite of trauma products. The first such product, the POWERWAND Rapid Exchange Catheter (REC), is designed to exchange an existing small-bore IV for a 17 gauge POWERWAND in a matter of seconds, without the need of a skin incision. The final POWERWAND product in the company’s Trauma Products offering is scheduled for release in September 2017.

Already Emergency Physicians around the country are responding enthusiastically: “Other than I.O. we have been stuck with the same imperfect products for decades, trying to make them work,” said one prominent Emergency Physician in San Diego. “These POWERWAND products represent a new state-of-the-art and will surely end up helping to save the lives of our sepsis and trauma patients.”

POWERWAND’s best-in-class midlines and extended dwell catheters have the highest completion of therapy and lowest total complications of any catheter in their class, including zero bloodstream infections in over 20,000 studied catheter-days.