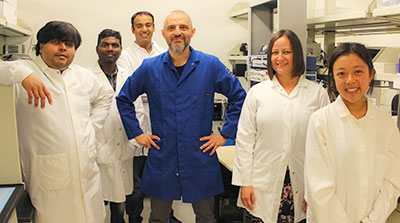 UC Davis Health scientists and physicians have discovered a cellular connection between diabetes and blood vessel narrowing that increases risks of serious health conditions such as heart disease and stroke. Previously, this same team of researchers found that high blood glucose activates an enzyme known as protein kinase A (PKA) that increased calcium channel activity and narrowed blood vessels. Calcium channels are a major focus within cardiovascular disease research, as they are the gatekeepers for calcium ions that relax or widen blood vessels and heart muscle.

“The first outcome was a surprise, since PKA is typically associated with blood vessel widening and wasn’t really on our radar,”  Manuel Navedo said, professor of pharmacology at UC Davis Health.  “We wanted to understand the molecular processes that created this opposite reaction.”

To understand more about this process, Navedo and his team did a series of tests on mice, which showed that in high-glucose conditions, an enzyme known as adenylyl cyclaseone 5 (or AC5) launched a string of cellular interactions that activated PKA, followed by the increased calcium-channel activity and narrowed blood vessels they saw in the first study.

The researchers plan to test the effects of the AC5 chain reaction on human cells. Their end goal is to find new and effective treatments for the vascular complications of diabetes that can lead to eye, kidney, cerebral, gastrointestinal and cardiovascular disease.

iData Research reports that the diabetes care market has recently decreased in value, but growth is expected to return to positive levels over the forecast period. The primary driver of growth will be the expanding diabetic population in the U.S. and increasing number of patients that require various diabetes care devices to manage their disease on a daily basis. Limitations to market growth include pricing pressure, due to Centers for Medicare & Medicaid Services (CMS) reimbursement changes, and a lack of reimbursement for new devices, such as CGM and FGM, for the non-insulin-dependent diabetic population.

“We see every day in our clinics the devastating impact of diabetes on the health and lives of our patients,” said Chiamvimonvat, the Roger Tatarian Endowed Professor in Cardiovascular Medicine at UC Davis Health. “Our work brings into much clearer focus how high glucose can damage the vascular system and gives us a new target for blocking its effects.”

More on the diabetes device market in the U.S. can be found in a series of reports published by iData Research entitled the U.S. Market Report Suite for Diabetes Devices .

The iData report series on diabetes devices covers the US and 15 countries in Europe including Germany, France, the United Kingdom (U.K.), Italy, Spain, Benelux (Belgium, Netherlands and Luxemburg), Scandinavia (Finland, Denmark, Sweden and Norway), Portugal, Austria and Switzerland. Reports provide a comprehensive analysis including units sold, procedure numbers, market value, forecasts, as well as detailed competitive market shares and analysis of major players’ success strategies in each market and segment. To find out more about diabetes device market data or procedure data, register online or email us at [email protected] for a Europe Market Report Suite for Diabetes Devices brochure and synopsis.