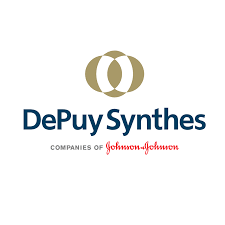 Founded in 1895 by Revra DePuy as DePuy Manufacturing, DePuy initially producing fiber splints to replace wooden barrel staves. Fast forward to the 21st century and an acquisition by Johnson & Johnson in 1998, DePuy formed part of the Johnson & Johnson Medical Devices Group and had become an industry leader in the medical device industry. Synthes was originally founded as a trademark in 1960 in Switzerland, and in 2012 was acquired by DePuy for $20.2 billion to form the DePuy Synthes brand, the world’s largest orthopedic corporation. Since then, the DePuy Synthes brand has been a world leader in the orthopedic reconstruction market.

The DePuy Synthes brand develops and markets products under the current brands:

DePuy Synthes and J&J are major players under each of their brands and in every market, capturing major market shares in most segments.

DePuy Synthes is a top competitor in the small joint market, benefiting from the presence in the internal fixation markets. Majority of DePuy Synthes’ market share is due to their majority presence in the hand and wrist device market, and notable presence in the shoulder reconstruction, elbow repair, and foot and ankle device markets. Wright Medical holds majority of the market share in the orthopedics small joint market, much due to their merger with Tornier in 2015, where they became one of the largest orthopedic manufacturers. Wright Medical continues to grow in market share as they focus on the shoulder reconstruction segment. Both DePuy Synthes and Wright Medical make majority of the internal fixation markets, while Zimmer Biomet and Stryker play more in the joint reconstruction markets.

DePuy Synthes is recently third in lead in the orthopedic large joint market, with strong presence in the hip replacement and knee replacement markets. They continue to invest in research and development and are looking to make a push to capture more market share in the large joints market. Zimmer Biomet became the dominant competitor in the large joints market following the merger of Zimmer Holdings and Biomet Inc. in 2015. Zimmer Biomet continues to invest into research and development and are looking toward new product launches in the next few years. Stryker recently captured market share following their improvements in the knee replacement device market.

The top three players in the sports medicine market, DePuy Mitek, Smith & Nephew, and Arthrex all mainly focus on the rotator cuff, shoulder labrum, ACL/PCL, and hip markets. DePuy Mitek holds their dominance in the sports medicine market through their offering of high-quality products. Arthrex is also highly commended for their high quality and innovation in their products. While Smith & Nephew still continues to hold their large market share, new firms continue to join the industry.