Throughout this medical market research, we analyzed 63 vascular access companies across Europe and used our comprehensive methodology to understand the market sizes, unit sales, company market shares, and to create accurate forecasts.

While this MedSuite report contains all the EU Vascular Access Devices market data and analysis, each of the market segments is also available as stand-alone MedCore reports. This allows you to get access to only the market research that you need.

Market growth is expected to be limited by pricing pressures across Europe. European healthcare facilities often trend towards lower-cost products, which forces many competitors to lower their prices. Furthermore, preferences for high cost, premium-priced versions of products, such as those with antimicrobial coatings, is still developing in many markets. As such, premiums on many of these devices are still being kept low and, therefore, there is not a significant upward force on the market from conversion to these products. 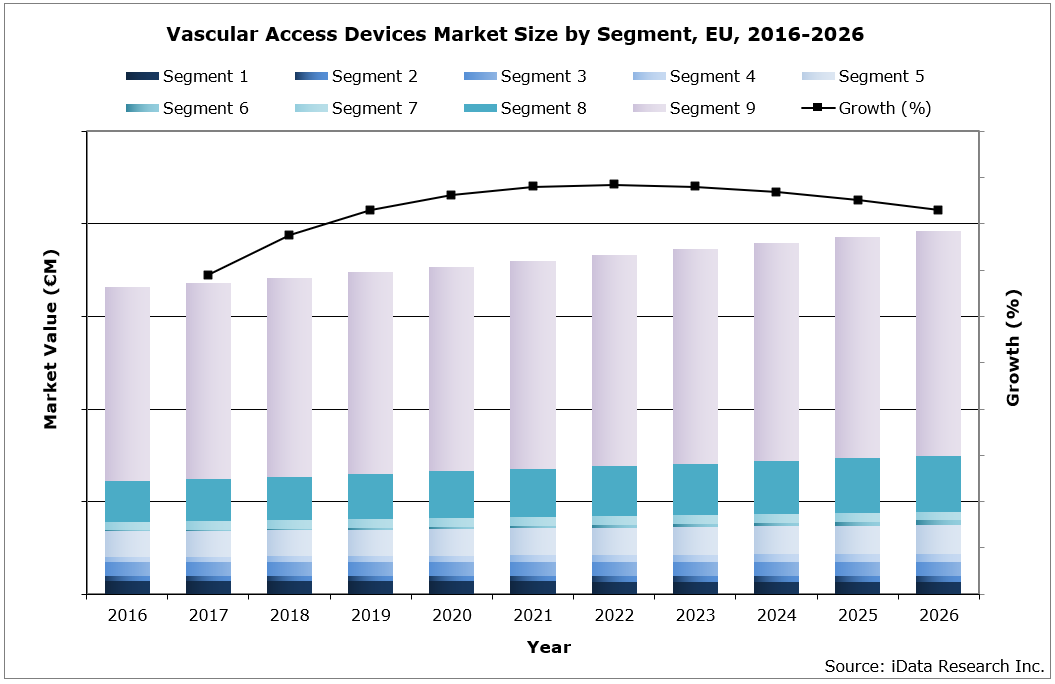 On the other hand, the market is benefitting from increased conversion towards safety devices that prevent needle-stick injuries. This trend is having a particularly strong effect in the PIVC and syringe and needle markets, which represent a sizable portion of the total vascular access market in Europe. Europe-wide legislation encouraging the use of safety devices implemented in 2013 and early 2014 has been transposed in all countries included in this report.

Long-term devices, such as implantable ports, CVCs, and PICCs, are expected to be among the fastest-growing segments of the global vascular access device market. Long-term catheters are typically much more expensive than short-term devices, like PIVCs. Furthermore, there is a high degree of motivation for technological improvement in those spaces. Power-injection is a growing trend for implantable ports and PICCs, allowing for high-pressure injections, such as those required for CT scans.

By 2020, Becton Dickinson led the European vascular access device and accessories market. Since its 2017 acquisition of C.R. Bard, Becton Dickinson has continued to be a major player in both traditional vascular access devices and accessories. With the acquisition of C.R. Bard, the company
now leads the majority of market segments covered in this report, and is the second or third leading competitor in most of the remaining markets.

B. Braun was the second-most-prominent competitor in the European vascular access market by 2020. The company managed this by being the second-leading competitor in a large host of markets, including implantable ports, port needles, CVCs, PIVCs and syringes and needles.

3M, despite only being present in the catheter securement market, was the third-largest player in the total vascular access device and accessories market. 3M derives its large revenue share from its high-volume sales of catheter dressings and securement devices, which are used with the majority of catheters placed in Europe.

Throughout this research series, iData Research has covered several countries in great detail. Each country may be purchased as a stand-alone report, tailoring the data to your needs. The countries covered are:

Feel free to click on any of the segments below to view detailed market segmentation. 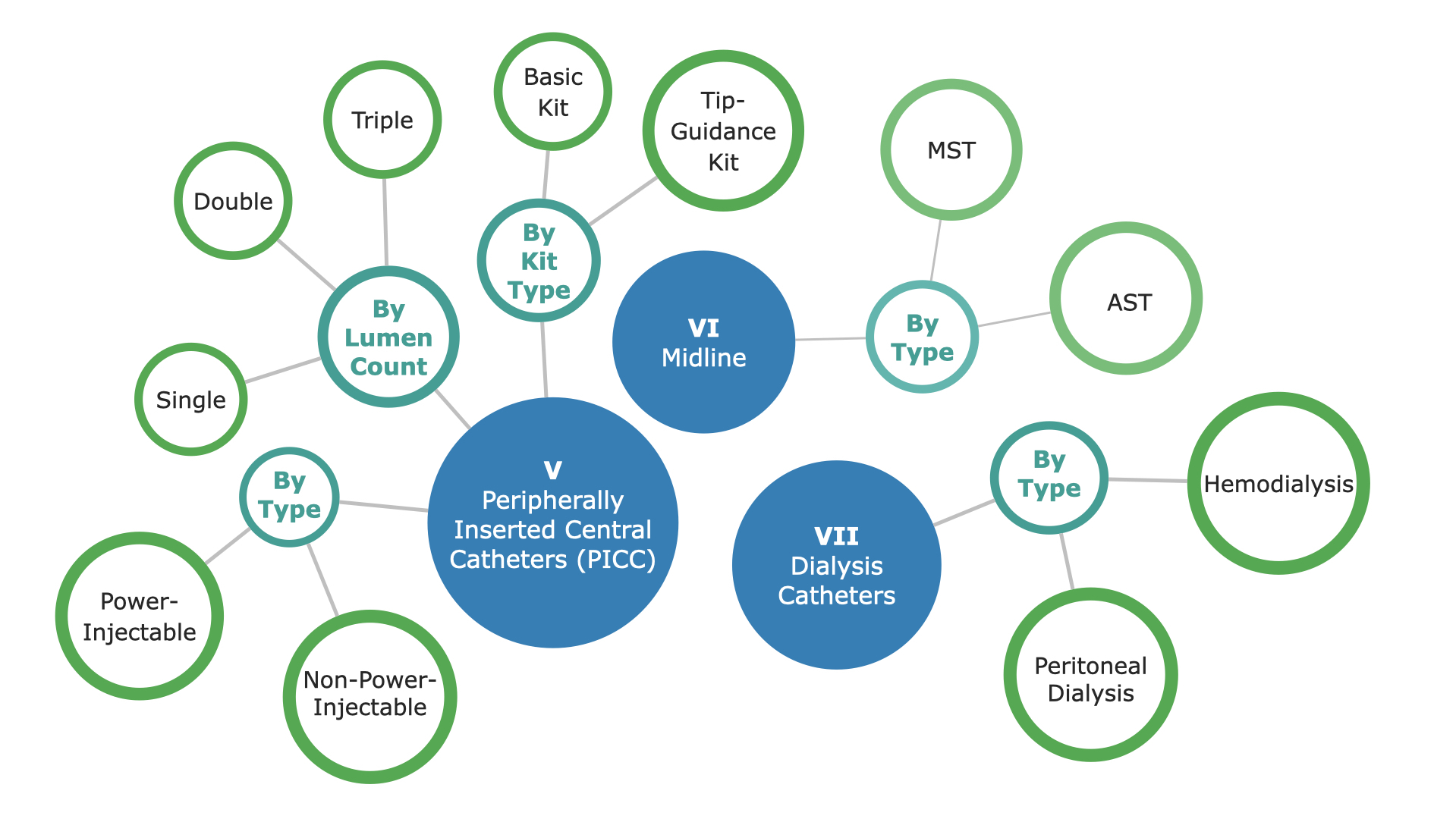 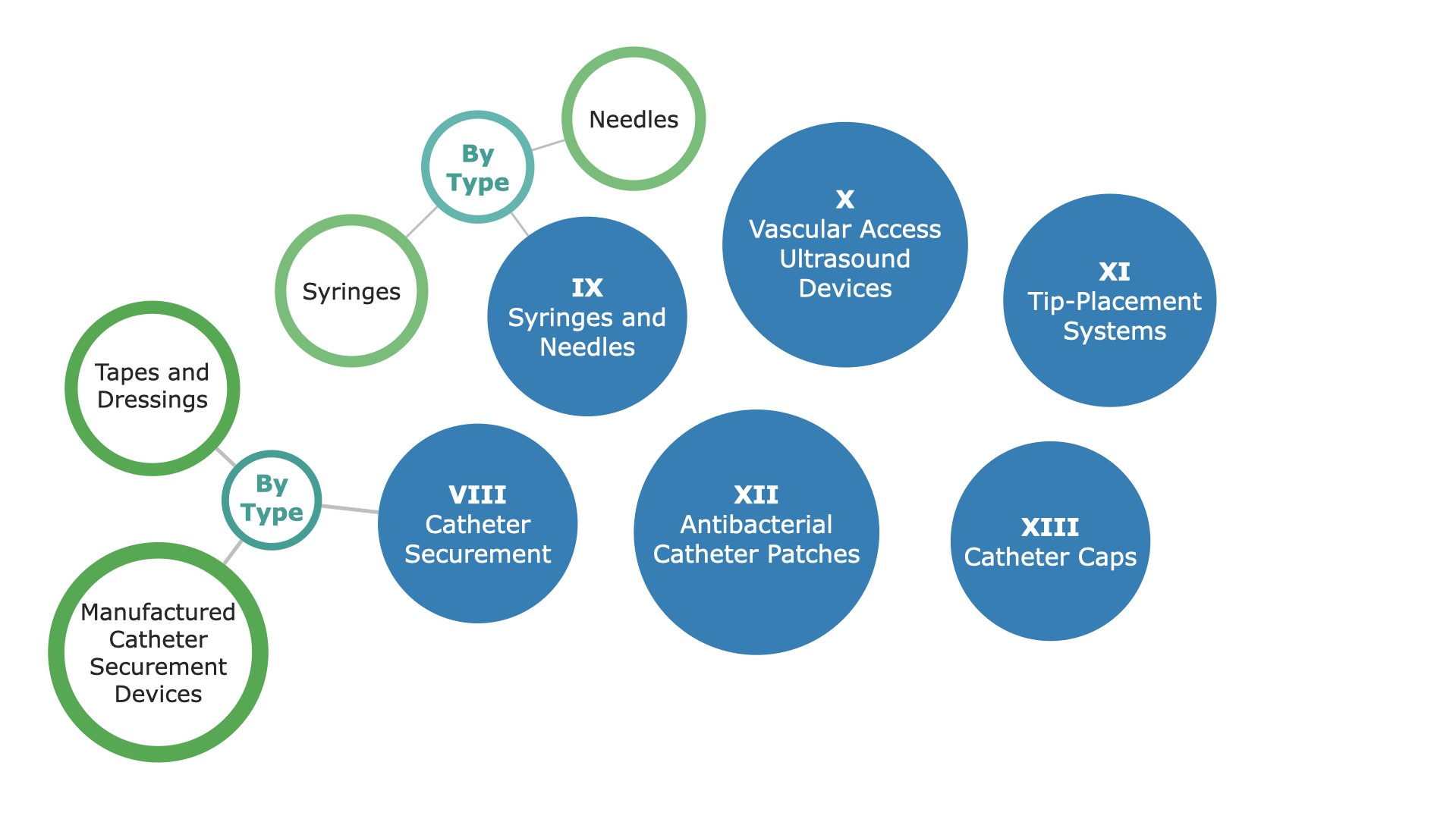 TABLE OF CONTENTS I