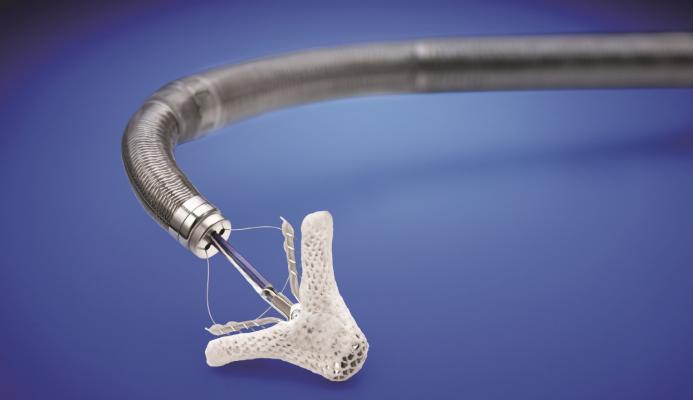 The past few decades have seen a drastic increase in technological advancements that have assisted in cardiac procedures and enhanced patient outcomes. Some of the latest developments in cardiology include advancements in mitral and aortic valve repairs and replacements, as well as more personal technologies that give patients an opportunity to monitor their health from the comfort of their own homes.

Currently, the only transcatheter mitral valve repair (TMVr) device that has been approved by the FDA is the MitraClip, which uses the edge-to-edge surgical method of valve repair. The MitraClip has also recently been approved for use on heart failure patients with functional mitral regurgitation, which could lead to market growth for this device. Many other companies are in the process of developing TMVr and transcatheter mitral valve replacement (TMVR) devices, but one TMVR device that stands out is Abbott’s Tendyne, which is still in trials. Currently, no TMVR devices have been approved for use, as it is an extremely technically challenging process with significant risks of fatal repercussions. Additionally, once approved, TMVR will be limited to patients who are at high-risk for complications from traditional open-heart mitral valve replacement. The markets for both TMVR and TMVr devices have the potential to take off if this method of treatment becomes a reality for all patients.

One potential driving factor for the MitraClip market is the large patient population globally. In the United States alone, over four million people are estimated to have mitral valve disorders. Many of these patients are also over the age of 65, and some physicians are reluctant to perform open heart surgery in this situation. This could also lead to growth in this market, as it presents an alternative to open heart surgery.

One factor limiting the MitraClip market is that it is a difficult procedure to perform. It takes approximately 100 procedures for a surgeon to become efficient and effective at providing treatment with the device. As more physicians become trained in this area, the market will also have more opportunity to grow.

However, as more transcatheter mitral valve repair and replacement devices are developed, the increased competition could stunt the growth of the MitraClip. There are currently over 20 companies in the process of developing transcatheter mitral valve replacement technology, and, while many of these companies are in the pre-clinical stage of development, several have obtained CE-mark approval and have trials planned in the United States.

Although it is not yet approved for use by the FDA, Abbott’s Tendyne has been showing promising results in its trial period. This device is unique, as it would be the first device that allows full replacement of the mitral valve without open-heart surgery. If this device is approved, it could drive the market for TMVR, but could hurt the growth of the MitraClip, as it creates more alternatives to open-heart surgery.

Transcatheter aortic valve replacement (TAVR) treatment is still only available to patients posing an intermediate or high-risk to complications surrounding open-heart surgery. Despite this, the TAVR market has grown quickly, and these devices are proving to be just as, if not more, effective than open heart surgery. Currently, the market is dominated by medical device juggernauts, Edwards Lifesciences and Medtronic, but Boston Scientific has recently entered into the market with approval for its Lotus TAVR device. These three companies’ devices have proven to be safer than previous models and are in a battle to gain approval to operate on low-risk patients, which would drastically increase the size of the current TAVR market.

Edwards Lifesciences, which is the leader in the cardiac surgery market, also dominated the market for transcatheter heart valve replacements. The company’s Sapien line of devices was the first to enter the market for TAVR and has remained the leading device. Edwards Lifesciences currently offers the Sapien 3 and the Sapien XT in the United States. Specifically, the Sapien 3 has shown to significantly reduce the risk of mortality and stroke when compared with open heart surgery. The future is bright for Edwards Lifesciences TAVR devices as, following positive test results, FDA approval for low-risk patients is expected later this year.

Medtronic also has a strong presence in the TAVR market with multiple devices, including the Evolut R and the Evolut PRO. Medtronic’s Evolut PRO features a unique design and has a surrounding wrap created from porcine heart tissue. If Edwards Lifesciences is able to penetrate the low-risk patient market, Medtronic’s share in the TAVR market will likely undergo a significant decrease.

With its recent FDA approval, the Boston Scientific Lotus Edge TAVR device provides another option for patients with high-risk of complications from open-heart surgery. This valve is designed to reduce the risk of paravalvular leak. Having recently entered the market for intermediate and high-risk patients, the Lotus Edge TAVR device is unlikely to win approval to operate on low-risk patients. Despite this, this device could be presented with an opportunity to increase its popularity in the market for high-risk patients, while Edwards Lifesciences and Medtronic continue to focus attention on low-risk patients.

Traditional balloon procedures have been linked to restenosis, and if the rate of restenosis continues to rise as it has in recent years, the prevalence of drug-coated balloons will increase as a solution to this problem. This market is also dependent on incidents of peripheral arterial disease, which becomes more common in aging patients.

This next-generation programmer connects a base station and patient connecter through a mobile app, which allows physicians to monitor the data. Medtronic has dealt with issues surrounding the safety of their devices that run with wireless technology in the past, but this device comes with top-notch security controls designed to prevent cyberattacks.

If this Bluetooth system can prove to be a secure way for physicians to receive data from patients’ cardiac implants, it has potential for significant applications in the medical market.

In the age of pocket computers, and global connectivity only a click away, it was only a matter of time before the medical industry adapted to the new technology. In recent years, there have been many new developments that essentially put a doctor at one’s fingertips. From a cardiologist’s perspective, these devices include mobile heart rate monitors and other devices that can alert doctors of possible trauma before it occurs.

This device provides a way to stop heart problems before they occur and has the potential to be adopted by anyone with a history of heart problems, a significantly sized market. Originally developed by St. Jude Medical, CardioMEMS is a device that alerts doctors that a previous heart failure could be getting worse, before symptoms arise. This small system is implanted in the pulmonary artery and can take pressure readings using a personal monitor, which then securely sends results to a physician. An issue holding this device back is that it was denied reimbursement coverage in a multitude of states and, without this, consumers could have difficulty justifying its high cost. Despite this, this device still has potential, as its innovative technology has the ability to save lives.

AliveCor integrated data from Omron HealthCare Bluetooth-enabled home blood pressure devices into its electrocardiogram technology for mobile devices and developed its AliveCor Kardia Mobile application. This app was the first consumer ready, clinically validated monitor that gave users the opportunity to take a medical-grade electrocardiogram from the comfort of their own homes. Before this, no other platform allowed users to monitor atrial fibrillation and blood pressure to evaluate a more accurate risk for stroke. This product has potential for large growth, as convenience is becoming increasingly valuable, but it is also at risk for increased competition as more companies become aware of this technology.

Wearable technologies are also becoming increasingly more popular, as they give consumers the ability to monitor their heart rate and other areas while on the go. In the past few years, these devices have also been adopted by many physicians and are now being viewed as a legitimate way for patients to monitor their cardiovascular system. Many popular technology companies have also entered into the cardiological realm with the addition of these wearable devices, such as the Fitbit or the Apple Watch. Other devices, such as the iRhythm, are taking a different approach to the wearable technology market, monitoring the heart specifically with a patch placed on the user’s chest, and not focusing on other functions, like the Apple Watch and Fitbit do. The market for these devices has potential for growth in the coming years, as their convenient size and sleek look are becoming more and more desirable to consumers.

More on Cardiology can be found in a Series of Cardiovascular Market Research Reports published by iData Research.

Everything You Need to Know About the Global Autotransfusion Device Market